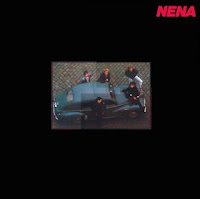 Reviewing this 1983 album would have proven to be a challenge in the pre-Internet days as I do not speak German, the native language that Nena performs in. Luckily, there are websites that translate the titles and lyrics, making it a bit easier to enjoy this new-wave release.


Side one starts with "Kino" ("Cinema"), a song about going to the movies at night to see films starring Bogart, Cary Grant, James Dean and more. It features some quirky synth sound effects.

"Vollmond" ("Full Moon") has a gentle swing to it musically, creating the perfect mood for this song about a romantic liaison after dark.

"Nur geträumt" ("Only Dreaming") tells of nocturnal desires that arise in the unconscious mind when two lovers have spent a long time apart. This one has a familiar rhythm to me as the band released an English version in 1984 under the title of “Just A Dream”.

I like the guitar and synth mix on the next track "Tanz auf dem Vulkan" ("Dance on the Volcano"). It has the distinctive new-wave sound that was coming out of Europe in the early 80’s that I enjoy.

"99 Luftballons" ("99 Red Balloons"), the second single, hit number 1 in Australia, Austria, Canada, Ireland, the Netherlands, New Zealand, Sweden, Switzerland and the UK. Here in the US, it spent thirteen weeks on the Billboard Hot 100 and topped out at number 2. The lyrics tell the tale of a cataclysmic nuclear war that is all started by balloons floating in the atmosphere being mistaken for missiles. While I have both the original version and the translated one, I do like the German one a lot. As I said, I do not speak the language yet this is one that I have heard so much that I can sing along to it in German. Most of us who grew up in the 80’s probably can. Plus, it is a great song to dance to.

Side two opens with "Zaubertrick" ("Magic Trick"), an ode to the spellbound effect love can have on a person. The synth effects have a similar, entrancing quality here while the percussion throbs like a beating heart.

"Einmal ist keinmal" ("Once is Never") slows things down with a sensitive number about a first-time encounter that leaves the singer wanting more.

“Leuchtturm" ("Lighthouse") is another celebration of love, this time speaking of always being there for one another and guiding one to safety like a lighthouse does to wayward ships in a storm.

"Ich bleib' im Bett" ("I Stay in Bed"), with its reggae sounds, talks about sequestering one’s self away to escape the stresses and problems of the day to day grind.

"Noch einmal" ("Once Again") has a hard rocking edge to it. The lyrics tell of the human trait of experiencing heartbreak, saying never again, and then falling back in because of our innate need for companionship.

The record closes with "Satellitenstadt" ("Satellite City"), a tale of a man-made floating city in space. It has everything one would need to survive, but it is cold and sterile.

Despite the language barrier, I do enjoy the synth-pop sound found here on Nena. It reminds me of how diverse the music was from the early new-wave period, when college radio stations were playing a lot of the music from all over Europe. Nena, along with Falco and Kraftwerk, were just some of the groups that came out of the German music scene at the time.
Posted by Martin Maenza at 4:30 AM