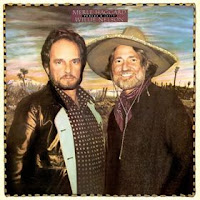 This month marks the thirtieth anniversary of Pancho & Lefty, the chart-topping 1983 country album from Merle Haggard and Willie Nelson. It went to number 1 on the US Billboard Country charts and crossed over to number 37 on the US Billboard Hot 200 as well. It also generated a pair of hit singles.


Side one begins with the gentle ballad title track. "Pancho and Lefty" was written by Townes van Zandt in 1972 and was the country-folk singer's signature song. This remake went to number 1 on both the US and Canadian Country charts; it also climbed all the way to number 21 on the US Billboard Adult Contemporary charts.

"It's My Lazy Day" meanders along like a babbling brook down a gentle countryside. It really captures that lazing about feeling quite well.

Even with a piano-heavy rhythm, "My Mary" keeps the laid back feel of this record going. Johnny Gimble is featured on the fiddle here.

"Half a Man", written by Nelson, is a rather melancholy tune about a man broken by a relationship.

"Reasons to Quit", a song about considering sobriety written by Haggard, was the first single. It went to number 7 on the Canadian Country charts and number 6 on the US Country charts. Its slight tempo increase is a welcome sound after a rather relaxed start of the record, but it does not really require the listener to get moving too much.

Side two picks up where the last side ended with "No Reason to Quit". It points out the consequences that the person in the last song faces when he chooses the substance over the people in his life.

"Still Water Runs the Deepest" slams a former lover for being selfish and uncaring.

"My Life's Been a Pleasure" is a fond recollection by an older man of the woman with whom he has spent much of his life.

"All the Soft Places to Fall" is a song about realizing when it is time to end ones partying ways and settling down with a good woman.

The album closes with another Nelson penned track "Opportunity to Cry". I like the blues feel to it thanks to the piano.

Pancho & Lefty is a collection of very mellow, laid back country tunes by two men who were big names in country music at the time. It is the type of album I would maybe listen to while sitting on the porch on a clear summer night with only the stars and maybe a beer to keep my company.
Posted by Martin Maenza at 4:30 AM