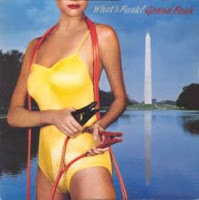 1983 marked the end of the line for the American rock band Grand Funk Railroad. What’s Funk? was the last studio album of original material to date from the trio of Mark Farner (vocals, guitars and keyboards), Don Brewer (vocals and drums) and Dennis Bellinger (bass and backing vocals). Later that year, the band broke up with Farner moving on to a solo Christian rock phase and Brewer joining Bob Seger’s Silver Bullet Band.

Today, we will look at this album for its thirtieth anniversary.


Side one begins with the thundering guitars of “Rock & Roll American Style”, a reminder of where the roots of rock began. It is a solid track with a great sound and catchy rhythm.

“Nowhere to Run” was a pop hit for Martha and the Vandellas in 1965. Grand Funk sticks close to the source on their cover of this Motown classic yet updates it a bit too with some synth sound in the background.

“Innocent” has a much more 80’s sound to it, thanks to the synth and drum blend.

“Still Waitin’” drops back a bit of the harder rock with the heavier guitars. I like the blend of the vocal harmonies on the chorus here.

Things slow down for “Borderline”, the ballad that closes out this first side. Farner’s guitar work here is more delicate and sensual.

Side two starts with “El Salvador”, a politically charged rocker about the troubles in the Central American country at the time. The lyrics are a rally cry for freedom from Communism.

“It’s a Man’s World” is a cover of the 1965 hit single from James Brown. This version has a slow, sultry strut to it which I like.

“I’m So True” opens with a very 80’s sounding synth sample, backed by a gospel-like piano riff. This one has a lot of different elements that actually work out better than you would expect. I found my head bobbing along to this one.

“Don’t Lie to Me” fakes you out with a slower intro but then it moves into a quick-step thumping drumbeat. Brewer really gets the spotlight here.

“Life in Outer Space” closes things out with a bit of a trippy, seventies rock track about a post-apocalyptic world. It has a nice effect with the guitar reverberating from channel to channel.

Back in 1983, I don’t believe I had heard much of What’s Funk?; if I did, I doubt I linked any of the songs particularly to this record. I could see the local album oriented rock station mixing some of these in to rock-blocks with other Grand Funk 70’s classics. Still, I enjoyed listening to it for this review and have found a few tracks to earmark for future downloads.
Posted by Martin Maenza at 4:30 AM