The Tubes - The Completion Backward Principle 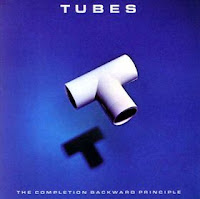 In April of 1981, the group released The Completion Backward Principle, their sixth studio album and first on the Capital Records label. The record went to number 36 on the US Billboard Hot 200 and gave the group their first Top 40 hit single as well.

Side one opens with “Talk to Ya Later”, a track co-written by the band with David Foster (the album’s producer) and Steve Lukather (of Toto). As the first single, it charted at number 101 on the US Billboard Album Chart and number 6 on the US Billboard Mainstream Rock charts. Looking back, I am surprised this track did not chart a lot higher than it did. I remember hearing it a lot back during my high school years, but that must have been on the album-oriented rock station. I have always liked its upbeat rhythm and in-your-face attitude.

“Sushi Girl” was released as the third single, but it failed to score any major chart action. More than just an ode to a trendy Asian cuisine, the lyrics make plenty of sexual allusions as well.

“Amnesia” slows things down a bit with a very mainstream sound. Older fans of the band might say here that the Tubes had forgotten their roots, but I think it was all a brilliantly calculated move to explore some new sounds with this record and to gain a wider audience.

“Mr. Hate” was the B-side to the third single. This song about an accused killer features a finger-snapping rhythm and a bouncing beat. I like how the music spirals into the dark and heavy range as the man slowly loses it. There is an odd ten-second or so segment at the end that is totally different musically from the rest of the song. Weird.

“Attack of the Fifty Foot Woman” closes out the first half with a fun nod to classic B-movies of the 50’s. Lyrically, it points out all the elements of those classics that you wish they could have put in the films. Musically, it has a bit of a Steely Dan sound to it.

Side two begins with “Think About Me”, the B-side to the second single. This one has a bit of a paranoid, on-the-edge mood (complete with rapid rhythm) as the guy in the song leaves one final request to his former lover.

“A Matter of Pride” has an up-tempo sound with a funky bass line that could easily have fallen out of the Hall & Oates catalog.

“Don’t Want to Wait Anymore”, the second single, charted at number 60 in the UK, number 35 on the US Billboard Hot 100 and number 22 on the Billboard Mainstream Rock charts. This ballad is a heart-wrenching love song with a bit of subtle sarcasm thrown in.

The B-side to the first single was “Power Tools”, a hard rocking ode the manly instruments of construction.

“Let’s Make Some Noise” closes things out with a bit of an R&B groove. I like the intentionally bad piano playing the drops in at the end of the first chorus, just to see how closely you are listening.

Admittedly, my first exposure to the Tubes came from their appearance in Xanadu a few years earlier. The Completion Backward Principle is the first of their albums that I heard a lot of and I rather enjoyed the singles that were on the radio. I got into more of this album from a greatest hits CD that I got awhile back. It is definitely one of those early 80’s albums that folks should check out if they have never heard it before.
Posted by Martin Maenza at 4:30 AM

Love me some "Talk To Ya Later" but am unfamiliar with the rest of the album. Both you and the soft rock kid seem to like it so I might give it a shot this Summer.

Very surprised that the single did not chart higher on the pop chart but it was all over the two AOR stations I was listening to at the time so number 6 on the Mainstream Rock chart seems about right.