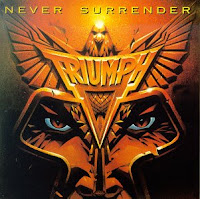 Today (January 28th) marks the thirtieth anniversary of the release of Never Surrender, the sixth studio album from the Canadian rock band Triumph (guitarist/keyboardist/vocalist Rik Emmett, bassist/keyboardist Michael Levine, and drummer/vocalist Gil Moore). The album was certified as Gold in both Canada (where it charted at number 29) and the US (where it charted at number 26 on the US Billboard Hot 200).


Side one begins with “Too Much Thinking”, a number that tries to make sense of the information coming in from various media sources. I like how it opens and closes with various broadcasts. Compared to all the outlets we have today (hundreds of cable TV channels, the Internet, etc.), the information overload in the early 80’s does not seem so bad really.

The third single, “A World of Fantasy”, charted at number 3 on the US Mainstream Rock charts. The lyrics tell of meeting a woman of his dreams and getting so lost in the idealized aspects of the relationship that he fails to see the truth about her.

The forty-four second long guitar-centric “A Minor Prelude” leads directly into the next track “All the Way”, a favorite on US Mainstream Rock channels (it charted at number 2). This one is a positive affirmation of focusing on one’s goals and seeing them through to their conclusion.

“Battle Cry” closes out the side with a grinding groove that is slightly less inspiring that its title would lead you believe. It is more like a “battle persuasion” really.

Side two opens with a nearly two minute “Overture (Procession)” which focus a bit on the synthesizer sounds before moving into a more classic rock march.

“Never Surrender”, the second single, charted at number 23 on the US Mainstream Rock charts. I like this one’s message as well as the solid playing by all three band members; it sounds great blasting from the speakers.

“When the Lights Go Down” opens with a country guitar riff which might seem a bit out of place with the heavier sounds of the band, but it works as a nice intro to this tune about tearing things up after dark. I like how the wah-wah guitar solo towards the end bounces from speaker to speaker.

“Writing on the Wall” reminds me a bit of Bryan Adams, another Canadian rocker who I reviewed earlier this week. It kind of ends rather abruptly though.

The side then closes with “Epilogue (Resolution)”, a prog-rock instrumental piece. The title along with the first one on this side would seem to imply a thematic musical suite, but I have not been able to put all the pieces together to make them fit as I would have liked. I must be missing something.

Back in 1983, the local album-oriented rock station we listened to out of Buffalo played a lot of Triumph as Canada was our nearby neighbor on the other side of Lake Erie. Never Surrender is a hard rocking record, which one would expect from the band. The whole thing, to me, is like an epic score to a big dramatic adventure. Even the cover hints at an almost comic-book like tale (the mask cut out is very Magneto-like).