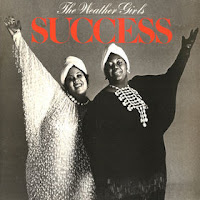 R&B singers Martha Walsh and Izora Armstead started out as backup singers for disco performers like Sylvester before breaking out on their own. They first recorded under the name of Two Tons o' Fun in the early 80's, having a number of Billboard Dance hits.

In late 1982, they hit number 1 on that chart with their signature single. Around the same time, they changed their name to the Weather Girls and recorded the album Success. Paul Jabara, who co-produced the record, also had his hand in writing most of the tracks. Also noted for working on it were Paul Shaffer (on keyboards) and Patti Austin and Deniece Williams (on backing vocals).

Today we will look at this 1983 release to celebrate its thirtieth anniversary.


Side one starts with the title track "Success". The song is a celebration of making it big and mirrored the good fortune that the Weather Girls were experiencing at the time.

"Hungry for Love" finds the ladies dining out in Paris, but their appetite is for more that just food. The sexually charged song is driven by a funky bass rhythm and a bouncy drum beat.

I like how "Dear Santa (Bring Me a Man This Christmas)" sprinkles in some familiar holiday refrains into the background melodies, from the slower opening overture to the later dance melodies. The song also uses some elements that are familiar to that of their big hit song which appears on side two - from their "hi" introduction to the appeal by lonely women to an imaginary icon.

Side two begins with "Hope". I like how this song switches gears a bit, going with a more lower-key gospel-like number. It really showcases the vocal power of Walsh and Armstead.

"It's Raining Men" was written by Jabara and Shaffer. It was offered up to a number of artists like Cher, Diana Ross, Barbra Streisand and Donna Summer; all of them passed on recording it. The Weather Girls took it to number 46 on the US Billboard Hot 100, number 34 on the Billboard R&B chart, and number 1 on the Billboard Dance chart in December of 1982. The song eventually sold over six million copies worldwide, hitting number 2 in the UK and Australia, and number 1 on the Euro Hot 100. I can remember quite fondly how this song, whenever played in bars and clubs over the next few years, would instantly fill the dance floor. Any time "It's Raining Me" comes on the radio, I find it nearly impossible not to sing along to it. It reminds me of fun times in my late teens. The song also became a huge anthem in the gay clubs as well; it was later adopted for the theme song for the "Men on..." sketches on In Living Color in the early 1990's.

The record closes with a disco-fied "I'm Gonna Wash That Man Right Outa My Hair", from the 1949 Rodgers and Hammerstein musical South Pacific. This track was also released as a single, though it had a hard act to follow after the mega-power of the previous hit.

Because of the strong disco connections, I have always been a fan of the Weather Girls. The songs presented here on Success are about strong women who are open about their wants and desires. Walsh and Armstead deliver them with confidence, power and sexuality that cannot be denied.
Posted by Martin Maenza at 4:30 AM