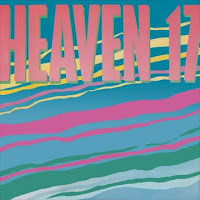 In September of 1981, the British synth pop band Heaven 17 (the trio of Glenn Gregory, Ian Craig Marsh and Martyn Ware) released their debut album Penthouse and Pavement. The record went all the way to number 14 on the UK charts and became a Gold seller.

In early 1983, a remixed version of that album called Heaven 17 was released in the US, where it climbed all the way to number 68 on the Billboard Hot 200. This happens to be one of my favorite albums from the 80’s, so today I thought I would give an in-depth look at it to celebrate its thirtieth anniversary.


Side one opens with “Who’ll Stop the Rain”, a funk-filled dance track with a driving bass line and rich, full chorus.

“Penthouse and Pavement” as a single went to number 57 in the UK and number 37 in New Zealand. The opening features a synth free-for-all backed by a tribal beat. The lyrics tell of a man who gets involved in organized crime as a way to better his station in life, despite the consequences. I like how John Wilson’s bass playing closes out the track when everything else fades. Just amazing.

“Play to Win” as a single went to number 46 in the UK and number 39 in New Zealand. The horn sections, provided by the Boys of Buddha, add to the power of this track about going for the brass ring in life. I really like all the layers musically going on with this track and the others.

“Let Me Go”, a plea for a release, did fairly well as a single internationally. It went to number 41 in the UK and Canada, number 26 in Ireland, number 41 in Canada and number 74 on the US Billboard Hot 100.

Side two begins with “(We Don’t Need This) Fascist Groove Thang”. It was the first single ever from the band, reaching number 45 in their native UK. The lyrics make reference to both UK and US political figures and denounce racism and fascism. The song was actually banned by the BBC while in the US burned up the Billboard Dance charts, reaching number 29.

The arrival of "The Height of the Fighting (He-La-Hu)" is announced by a horn fanfare. One of my favorite touches is the synthesized sirens halfway through that go from speaker channel to speaker channel; it sounds very cool when listening to this album with headphone on (which I did often). As a single, it did not chart in the UK but it did reach number 20 in New Zealand.

"Geisha Boys and Temple Girls" has an exotic, sexual vibe to it as it hints to a taboo love.

"I'm Your Money" has a bit of a cold, impersonal vibe to it - both with the musical rhythms and some of the vocals. For me, it reflects the whole “it’s all business” nature of the song that comments on commercialism and wealth.

"We're Going to Live For a Very Long Time", a song that touches on religious fanaticism, ends the record. On the original vinyl, the final chorus ran up to and onto the runoff groove. This basically gave a looping effect of the phrase "for a very long time", making the song run indefinitely until the needle was picked up. I always thought that was a cool thing and would often leave it repeating for a couple minutes before I ejected the record.

I owned a copy of Heaven 17 on vinyl back in 1983, purchased at the local record store after hearing many of the tracks on college radio. I loved the whole dance vibe that the band put out and played this one endless over the next five to six years, especially on weekends while getting ready to go out to the bars and clubs dancing.

This record remains a favorite of mine today, thirty years later. According to the play count stats in iTunes, these tracks are some of the most played in my digital library; I easily listen to this album at least once every couple of months.
Posted by Martin Maenza at 4:30 AM

Sounds like what you have there is an amalgam of their first two albums - P&P and Luxury Gap. If you haven't already, you should check out the full original albums (both of which have been recently reissued as lovely 2CD + DVD sets), as you've very possibky missed out on some great tracks! and they still tour - I saw them last year and they are still fabulous.

You should really try the original version of the album, as not only does it omit some of the tracks on the import version you have (namely 'I'm your Money') but there are plenty of others to make up for it.
Then after listening to that, you really should go out and find 'The Luxury Gap' which is actually where some of the tracks you mention, first appear.

Jon and Tim, I actually have digitally all the tracks from both Penthouse and Pavement and the Luxury Gap in my music library. As those are the vinyl I grew up with, those are how I tend to listen to them. Thirty year old habits die hard.

The review for The Luxury Gap will be coming in April. :)

Oh, and thanks so much for the comments. They are always appreciated. I hope you come back and visit the blog often.

I would love to see Heaven 17 on tour if they ever come to the States again.