Suzi Quatro - If You Knew Suzi… 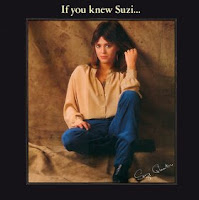 On February 22nd of 1979, Suzi Quatro’s sixth studio album If You Knew Suzi… was released in the United States where it peaked at number 37 on the Billboard Album chart. It had come out in late 1978 in the UK with a slight different song line up.


Side one begins with “If You Can‘t Give Me Love”. The opening with the single guitar before the rest of the band joins in is a nice touch. The whole number has a bit of a California country-rock flavor to it.

“Stumblin’ In”, a duet with Chris Norman (the lead singer for the 70’s band Smokie), was Quatro’s biggest hit in the States; it reached the number 4 spot on both the US Billboard Hot 100 and the Billboard Adult Contemporary charts, number 41 in the UK and number 2 in Australia. In an open and honest way, the lyrics tell of a couple who have found love almost by accident. I am a big fan of this song. I loved it whenever it came on the radio back in the day, and I am taken back in my mind to 1979 every time I hear it.

“Suicide” goes down a dark and melancholy road. The guitar work perfectly mirrors that mood.

“Tired of Waiting” was a hit single for the Kinks in 1965, the year I was born. Quatro’s ethereal cover spins the classic for a new audience from my generation. Deacon’s keyboard solo is spotlighted here.

“The Race Is On” was the first single from the album; it reached number 43 in the UK and number 28 in Australia. This track too has a bit of resolved acceptance to the direction that life is going, but it is countered by a sing-along, join-in chorus. It is almost saying you are not alone and that you don’t have to be.

Side two opens with “Don’t Change My Luck”, the album’s third single. This one about moving on to some happiness in a new relationship peaked at number 72 in Australia.

“Breakdown” was the first single from Tom Petty and the Heartbreakers’ 1976 debut album. Quatro does a smooth, sultry cover of the tune.

The B-side for the first single was “Non-Citizen”, a track with a grinding guitar groove foundation that propels everything else forward.

Rick Derringer wrote “Rock and Roll Hootchie Koo” which was first recorded by Johnny Winter in 1970. Derringer himself then took it up the charts in 1973. Quatro provides a rocking cover here.

“Wiser Than You”, the final track, was also the B-side to the third single.

My first exposure, like a number of my friends, to Suzi Quatro was from her seven appearances as “Leather Tuscadero” on the sitcom Happy Days. These episodes ran from 1977 to 1979, a period that overlapped the release of If You Knew Suzi…. I am sure that extra public awareness helped to make this her highest charting album in the States.

I have enjoyed discovering the band’s music over the past few years, digging into their back catalog from the early 1970’s to the 1980’s and more. Following Suzi on Twitter, it is great to hear that she’s still rocking today.