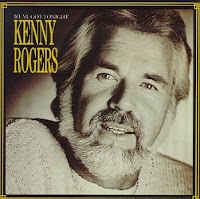 In 1982, American country singer Kenny Rogers had success with Love Will Turn You Around (click here for that review).

February of 1983 saw the release of We've Got Tonight, his eleventh solo studio album. It was also his final album on the Liberty Records label before moving over to RCA Records. The Platinum seller went to number 19 in Canada, number 18 on the US Billboard Hot 200 and number 3 on the Billboard Country charts. Today, we will take a look at this album as part of its thirtieth anniversary celebration.


Side one begins with the title track, a beautiful ballad written by Bob Seger (it originally appeared on his 1978 album Stranger In Town). This duet version of "We've Got Tonight" features Sheena Easton. It was released as the first single, hitting number 1 on both the US and the Canadian country charts and the Canadian Adult Contemporary chart; it also went to number 28 in the UK, number 18 in Ireland, number 11 in Austria, number 10 in Norway, number 6 on the US Billboard Hot 100, number 4 on the Canadian pop chart, and number 2 on the US Adult Contemporary chart.

"Scarlet Fever", the third single, stalled at number 94 on the US Billboard Hot 100 but went to number 5 on the US Country chart and number 4 on the Canadian Country chart. The song tells the story of a very young striptease dancer named Scarlet who captures the heart of a man in the audience.

"Farther I Go" was selected as the B-side to the second single. This up-tempo number speaks to how absence and distance can often make the heart grow fonder.

The heartfelt piano-dominant "No Dreams” is next. Anyone who has experienced romantic heartbreak is likely to be touched by this song.

Side two opens with the gentle ballad "All My Life". As the second single, it hit number 37 on the US Billboard Hot 100, number 13 on US Country chart, number, number 3 on the Canadian Country chart, and number 2 on the US Adult Contemporary chart. It’s funny - with all my listening of Top 40 radio around the time one was on the charts (Spring of 1983), I had a very hard time placing it after three decades.

"How Long" was written for Rogers by Lionel Richie. It speaks to the longing in the heart to find that special love that is everlasting.

"Love, Love, Love" is a very slow-tempo track; the main character of the song is desperately holding on to every strand of a fading relationship in hopes that it won’t disappear from his life permanently.

The B-side to the third single was "What I Learned From Loving You". It continues the same theme and delivery as the previous track, with the man now able to look objectively at the lessons gleaned from the past.

"You Are So Beautiful", which closes the album, was written by Bruce Fisher and Billy Preston and appeared on Preston's 1974 The Kids and Me. Joe Cocker recorded it that same year as well. Rogers' version of this classic, chosen as the B-side to the first single, is nicely subdued in hopes to differentiate itself from Cocker’s signature classic.

For me, I preferred side one of We've Got Tonight over side two. While all the songs are solidly delivered by Kenny Rogers, I think there is a lack of variety on that second side. I like when things get mixed up a bit, just to keep me interested.
Posted by Martin Maenza at 4:30 AM