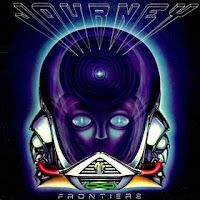 Today (February 22nd) marks the thirtieth anniversary of the release of Frontiers, the eighth studio album from the American rock band Journey. Lead singer Steve Perry, keyboardist Jonathan Cain, guitarist Neal Schon, drummer Steve Smith and bassist Ross Valory delivered another multi-Platinum album that has sold over 8 million copies world-wide. This was a follow up to 1981’s Escape (click here for that review).


The album went to number 39 in Germany, number 21 in Sweden, number 12 in Norway, number 10 in Canada, number 6 in the UK, number 3 in Japan and number 2 on the US Billboard Hot 200. It also generated four chart topping singles.

Side one starts with “Separate Ways (Worlds Apart)”. As the first single, it charted at number 50 in Japan, number 8 on the US Billboard Hot 100 (for six weeks straight), and number 3 in Canada and France. It also went to number 1 on the US Mainstream Rock charts. The opening guitar riff followed by thundering drums instantly gets my energy level up. It really kicks off the whole record on a powerful note.

The fourth single from the album was “Send Her My Love”; it reached number 27 on the US Adult Contemporary chart, number 23 on the US Billboard Hot 100, and number 9 in France. This gentler tune speaks to those lingering feelings of love and how some people are just forever in your heart. This one was a slow dance favorite for the next year or so after the album’s debut.

“Chain Reaction” was chosen as the B-side for the fourth single. This one has a solid chorus harmony to it.

“After the Fall”, the third single, peaked at number 30 in the US Mainstream Rock chart and number 23 on the Billboard Hot 100. This mid-tempo ballad made an appearance in the 1983 film Risky Business which starred Tom Cruise and Rebecca De Mornay.

As the second single, the ballad “Faithfully” went to number 10 in Canada, number 24 on the US Billboard Adult Contemporary chart and number 12 on the US Billboard Hot 100. The song is about a traveling musician and his relationship with his wife at home. Here Journey crafted another quintessential 80’s slow dance standard. Listening to it once more for this review, I can feel the muscle memory overtaking my body. I am instantly transported me back to darkened, end-of-the-night dance floors at school and out at the local bars.

Side two opens with “Edge of the Blade”, a tune about someone seduced by a life of fame and fortune.

This slow down a bit with “Troubled Child”, the story of a runaway teen.

“Back Talk” appeared as the B-side to the second single. This song about trouble at home has a hard rocking edge to it, driven again by the drums and guitars. You can feel the pressure building to an explosive detonation.

The title track “Frontiers” is next; it served as the B-side to the first single from the album. It keeps the energy level going and features some soaring synthesizer sequences. The lyrics can be seen as a commentary of the changing musical scene at the time with a stronger emphasis on digital instruments.

“Rubicon”, the final track, was used for the B-side to the third single. The song is a rallying cry to stand tall and work hard towards the future you want.

For me, Frontiers is a fairly solid record. The first side is full of the hits that were in regular rotation on album-oriented rock as well as Top 40 radio stations at the time. The second side features lesser played but still decent tracks as well. All in all, it is certainly worthy of being Journey’s second best selling album ever.