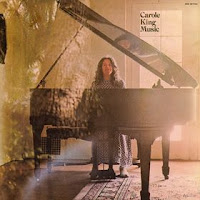 Not resting idle after the release of her smash album Tapestry in February of 1971 (click here for that review), King followed it up in December of that same year with Music, her third studio album. It climbed all the way to the number 1 spot on the US Billboard Hot 200 by New Years Day of 1972, spending three consecutive weeks at that spot, and eventually achieved Platinum sales. It also went to number 28 in Japan, number 18 in the UK, number 10 in Norway and number 2 in Canada.


Side one begins with “Brother, Brother”. Teresa Calderon plays the conga drum that is prominent on the opening of this track about admiration and encouragement of blacks in America at the time. The song was released as the second single from the album.

“It’s Going to Take Some Time” was co-written by King and Toni Stern; it was used for the B-side to the second single from the album. A year later, the Carpenters recorded a cover of the song for their fourth album A Song For You and took it to number 12 on the US Billboard Hot 100 and number 2 on the Billboard Easy Listening charts. I like King’s original version for its stripped down sound with her piano melodies shining through.

“Sweet Seasons”, the first single from the album, went to number 9 on the US Billboard Hot 100. The song has a laid back rhythm to it that brings to mind a sunny spring day with few cares in the world, much like my childhood of the early 70’s when this song was all over the radio.

King and Gerry Goffin wrote “Some Kind of Wonderful” in the early 1960’s and was first record by the Drifters (whose version reached number 32 on the US Billboard charts and number 6 on the US R&B charts). King’s version here has a quiet coffeehouse vibe to it that presents it in an all new light.

“Surely” is a very intimate piece with King opening up her heart to her love, fully exposed and vulnerable. The instrumental bridge which includes Curtis Amy on the electric flute is very beautiful.

“Carry Your Load” closes the side with a lovely song about unity and brotherhood, a caring response to the troubled times of the early 70’s.

The title track “Music” opens side two. It has a jazz swing to its rhythm as it celebrates the sounds that swim through our heads. She and the band really just jam on this one.

“Song of Long Ago” puts in words and melodies those feelings that a song from your past can do for you. James Taylor gives her an assist with backing vocals on this track.

“Brighter” celebrates that person in one’s life that is there for them in times of trouble, who can turn the gray skies to blue.

“Growing Away From Me” is an awakening to a relationship that is slowly falling apart.

“Too Much Rain” comes from a place of pain and heartache. The singer retreats to someplace safer, to recover and come to grips to everything that has happened.

The opening drums and guitars on “Back to California” perfectly capture that train on the tracks sound. The song celebrates the anticipation of going home, and the listener really gets that feeling from the music. It is my favorite track on the second side and a solid way to close the record.

I had a handful of the tracks from Music on a greatest hits collection, so listening to the rest of this album was a new experience for me. I definitely enjoyed it. Carole King is one of those amazing songwriters that everyone who enjoys pop music from the 60’s and 70’s should know.
Posted by Martin Maenza at 4:30 AM