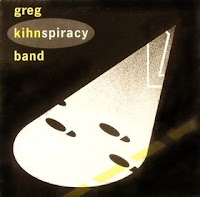 Today (February 3rd) marks the thirtieth anniversary of the release of Kihnspiracy, the eighth studio album from the Greg Kihn Band. Thanks to a big top 10 hit single, the album climbed all the way to number 15 on the US Billboard Hot 200 charts.


Side one starts with the hit single “Jeopardy”. As the first and only Top 10 single by the band on the US Billboard Hot 100, it peaked at the number 2 spot (denied by Michael Jackson’s “Billie Jean”). However, it did strike number 1 on the US Billboard Dance charts. I am a big fan of this song; I love how all of the instruments come together on this one. I owned a copy on a 45 back in the day and played it a quite a bit through out 1983. It was definitely one I would hit the dance floor when it came on in the bars and clubs.

“Fascination” served as the B-side to the first single. I really like the guitar riffs on this one as well.

“Tear That City Down” was released as a maxi-single with a live version on the B-side. It has a bit of a southern rock vibe to it. I remember hearing this one on the album-oriented rock stations back in the day as part of weekend rock blocks.

The B-side to the second single was “Talkin’ To Myself”, a tune with a finger-snap-along beat and a casual street corner attitude. It reminds me of the early doo-wop days of rock ‘n’ roll.

“Can’t Love Them All” is a hard-rocking bit of relationship advice about what happens when you try to juggle more than one lover.

Side two begins with “I Fall to Pieces”, a mid-tempo rocking cover of the 1961 Patsy Cline hit.

“Someday” is a wistful number as a guy longs for the day when the girl he loves will return the same affection.

“Curious” is a little repetitive lyrically but pumps along with a great beat.

The album closes with “Love Never Fails”, the second single. This one stalled at number 59 on the US Billboard Hot 100. I like how this one simmers with a funky groove.

Like the band‘s 1982 album Kihntinued (click here for that review), Kihnspiracy is really hard to find these days. Again, I think that is a shame as this record features some great melodies and catchy rock songs.
Posted by Martin Maenza at 4:30 AM