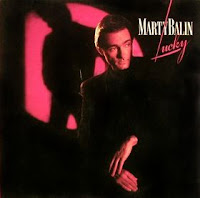 American born musician Marty Balin was part of Jefferson Airplane in the 1970's before embarking on a solo career in the early 80's.

Today (February 11th) marks the thirtieth anniversary of the release of Lucky, his second solo studio album. It peaked at number 156 on the US Billboard Hot 200 chart. Balin provided the vocals on the record while being joined by Steve Goldstein (keyboards and synthesizers), Louis Biancaniello (synthesizers), Waddy Wachtel (guitar), Kevin McCormick (bass) and Rick Marotta (drums).


Side one begins with the inspirational encouragement of "Born to Be a Winner". It bounces along with a solid pop-rock beat. While not a single, the song did have a video that appeared on the early days of MTV.

The second single "Do It for Love" fell two slots short of entering the US Billboard Hot 100. It is a sweet ballad about finding that right someone and basing actions on making a brighter future with them.

"What Love Is", the first single, reached number 63 on the US Billboard Hot 100 chart. I remember this one from the radio back in the day, with its swaying melody and sultry story.

Side two opens with "Heart of Stone", the B-side to the second single.

"Palm of Your Hand" follows.

The B-side to the first single was "Will You Forever?"

"All We Really Need" is next.

The album closes with "When Love Comes", a mid-tempo rocker about being prepared to welcome that right person into your life.

I have to apologize for the sparseness of this review as I could not find a majority of the tracks from Lucky to listen to online. None of the usual sources had them, and the album is not available for download on any of the digital stores. From what my research tells me, the album was only released on vinyl.

The good news is that there is an import CD that contains both this album and his 1981 album Balin, both digitally re-mastered, being released this week. So, if you are a fan of Marty Balin’s early 80’s solo work, definitely check that out.
Posted by Martin Maenza at 4:30 AM