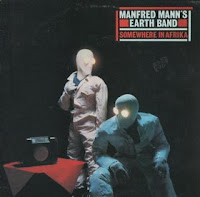 Yesterday (February 18th) marked the thirtieth anniversary of Somewhere in Afrika, the eleventh studio album from Manfred Mann’s Earth Band. The release peaked at number 87 in the UK, number 40 on the US Billboard Hot 200, and number 8 in both Germany and Norway.


The North American version of the album had a slightly different arrangement than the one released in the rest of the world. For my review, I will focus on that track listing and order.

Side one starts with “Demolition Man”, a track written by Sting for the Police’s 1981 album Ghost in the Machine. The industrialized sound that the Earth Band went with really adds a unique flavor to this cover.

“Runner” was written by Ian Thomas and appears on his 1981 album The Runner. This cover version opens with suspenseful synth riff and pounds with a steady drumbeat. As a single, the song peaked at number 22 on the US Billboard Hot 100 and number 34 on the Canadian charts.

“Rebel” was first released in 1979 by Reg Laws. The cover version here pops and percolates in a positive way. I like the saxophone solo.

“Eyes of Nostradamus” first appeared on Al Stewart’s 1973 album Past, Present and Future under the title of “Nostradamus”. This cover has a funky, tribal rhythm that drives it.

Side two begins with “Somewhere in Africa“, a traditional song that originated in South Africa.

“Tribal Statistics” has a rapid synth foundation that matches the computational nature of the lyrics with an automated, computerized sound.

“Lalela”, at about a minute and a half in length, is a mostly instrumental track.

“Redemption Song (No Kwazulu)” was written by Bob Marley and first appeared on his 1980 album Uprising. Unlike Marley’s original acoustic version, this one is more fully developed with full orchestration. The lyrics urge the people to free themselves from mental slavery. The US version is about a third less in length from that of other versions of the album.

The first movement is “Brothers and Sisters of Africa”. It features a choir singing in native African dialects at the start.

“To Bantustan?”, a song about imprisoning those that the government does not want to deal with, has a strong, driving beat

“Koze Kobenini? (How Long Must We Wait?)” then contrasts things with a much stripped down sound, again relying about upon the choir for most of the melodies.

“Brothers and Sisters of Azania”, a mostly instrumental track, closes out the album. It recalls elements of the first track in this set.

Was just listening to this album and as I started doing, I checked to see if you had covered it and indeed you had.

But once again, you left no opinion on the overall album. Based on your track by track review, I'd say you liked it though.

I liked it well enough. Your rating works for me.