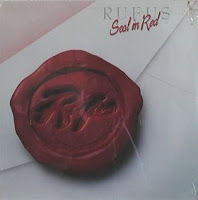 It's Friday and that always meant going out dancing for me back in my college days.

This month marks the thirtieth anniversary of the release of Seal in Red, the eleventh and final studio album from the R&B/funk band Rufus. It charted at number 49 on the US Billboard R&B charts.

Side one opens with “Take It to the Top”, the first single from the record that peaked at number 47 on the US Billboard R&B chart. With a vibrant beat, funky bass and blaring horns, it instantly put me in a dancing mood. I was grooving in my seat as I was typing this review up.

“The Time Is Right” is a mid-tempo tune about coming together in peace and harmony.

The tempo continues to slow with the ballad “When I Get Over You”, a song about trying to forget a former love and to move on to someone new.

I like the slinky rhythm of “You Turn Me All Around”. The lyrics speak to having one’s head spinning with infatuation.

“You, the Night and the Music” roars in on an infectious bass line. As the lyrics say, “ain’t nothing wrong with a funky groove”. It really closes off this first side on a solid note.

Side two begins with “Blinded by the Boogie”, a track about the seductive sounds of the night and people acting on their passion-filled impulses.

After that hot side opener, “I’m Saving This Love Song” cools things down a bit with a passionate promise of fidelity.

The band breaks out the vocorder to get some vocal distortion on “You’re Really Out of Line”, giving it a more mechanical feel. I like Watts’ saxophone work here.

“Distant Lovers” explores the topic of being separated by the miles after a brief, passionate period together.

“No Regrets” keeps the beats going with this one about people who move through life with zero remorse for their actions.

I was completely unfamiliar with Seal In Red prior to doing this review, but Rufus delivers some classic 80’s R&B that I love to dance to. There are a number of tracks from here, particularly the up-tempo dance ones, which I instantly downloaded to add to my digital music library.
Posted by Martin Maenza at 4:30 AM