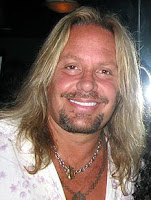 The Hollywood born native started with his first band Rock Candy in 1980 and then joined high school friend Tommy Lee in Mötley Crüe in 1981. Neil became the group's lead vocalist.


The heavy metal rockers soon released their debut album Too Fast For Love (click here for that review).

In the fall of 1983, they followed with their second album Shout at the Devil (click here for that review) which skyrocketed their career.

As the band continued to record through out the 80's, Neil got into celebrity racing and formed his own team. He retired from the sport in 1992 after a car crash during a race in Long Beach.

Through out the 90's, Neil had a solo recording career and then rejoined Mötley Crüe in 1998 after VH1 did a Behind the Music profile of the band.