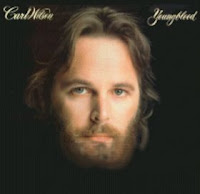 This month marks the thirtieth anniversary of the release of Youngblood, the second and final solo studio album from Carl Wilson.


Side one begins with “What More Can I Say”, a rousing rocker about trying to convince someone to take a chance on an untried situation.

“She’s Mine” is full of territorial vibrato.

Things slow down a bit with the next track. “Givin’ You Up”, the second single from the album, failed to chart. Though it has a bit of a vanilla light rock sound, it features some lovely harmonies.

“One More Night Alone” continues down the mellow ballad path with this plea for one last chance at happiness. Hinsche wrote this track.

In 1975, John Fogerty recorded “Rockin’ All Over the World” for his self-titled second solo album. This cover features a more prominent keyboard and horn part, giving it a bit of a different flavor from the original.

Side two opens with “What You Do to Me”. Released as the first single from the album, it peaked at number 72 on the US Billboard Hot 100 yet went all the way to number 20 on the Billboard Adult Contemporary chart. I like its bouncy rhythm.

A slightly slower tempo, bluesy version of “Young Blood”, which first charted in 1957 by the Coasters, is next.

“Of the Times” is a mid-tempo reflection upon current events.

The B-side to the second single was “Too Early to Tell”, a rocking duet with Myrna Smith who co-wrote the song with Wilson and Daly. In my opinion, it outshines the main side of that single.

“If I Could Talk to Love” proposes that how things play out in relationships are completely out of one’s hands. I don’t really buy into that take.

“Time”, which was released as the B-side on the first single, closes out the record. The song is about needing space to figure out where things are going and what one wants out of life.
Posted by Martin Maenza at 4:30 AM