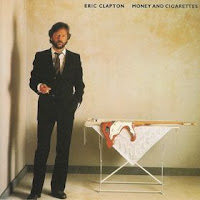 Today (February 1st) marks the thirtieth anniversary of the release of Money and Cigarettes, the eighth solo studio album from British guitar legend Eric Clapton. This 1983 album went to number 20 in Australia, number 16 in the Netherlands and on the US Billboard Hot 200, number 13 in the UK, number 11 in New Zealand, number 9 in Japan, number 5 in Sweden and number 3 in Norway.


Side one opens with the bouncy mid-tempo “Everybody Oughta Make a Change”, a cover of a tune by bluesman Sleepy John Estes. This one was used for the B-side of the first single.

As the second single, “The Shape You’re In” charted at number 75 in the UK. It is a tight blues boogie that sounds great when tooling down the open highway. The lyrics are of a man trying to convince his girl to give up the bottle (something Clapton was very familiar as he just came through a tough bout with alcoholism himself).

“Ain’t Going Down”, a song about determination to survive, was a US Mainstream Rock favorite, charting there at number 32.

The first single “I’ve Got a Rock ‘n’ Roll Heart” only hit number 83 in the UK and number 81in Australia; in North America it faired much better as it went to number 24 on the US Mainstream Rock chart, number 18 on the US Billboard Hot 100, number 17 in Canada and number 6 in the US Adult Contemporary chart. I remember this one from lots of radio airplay back in the day, with its mellower opening that builds to the sing-along chorus. Lee’s keyboards really bring some “church” to this testifying to the power of rock ‘n’ roll.

The mid-tempo “Man Overboard” closes out the side.

Side two begins with “Pretty Girl”, a lovely ballad to an equally lovely woman. There is a very smooth guitar solo by Clapton on this one.

“Man in Love” follows with a bit of a proud country-swagger to its rhythm.

“Crosscut Saw” appeared on the B-side to the second single. The innuendo-laden tune had my toe tapping to that one-two beat right out of the gate.

“Slow Down Linda”, the third single, failed to make much movement on the charts despite its up-tempo sound and a down-home charm.

“Crazy Country Hop”, a cover of a 1958 tune by Johnny Otis, closes out the record on an up-beat party note.

With Money and Cigarettes, Eric Clapton and his band deliver a solid record with ten thoroughly enjoyable tracks. There is not a bad one in the bunch.
Posted by Martin Maenza at 4:30 AM