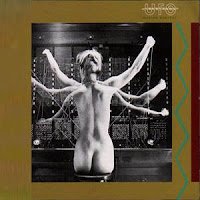 The English heavy metal rock band UFO, which has been active since 1969, has been ranked at number 84 on VH1's 100 Greatest Artists of Hard Rock list. In February of 1983, they released Making Contact, their eleventh studio album. It charted at number 153 on the US Billboard Hot 200 and number 32 in the UK. The line-up of the band at this point was Phil Mogg (vocals), Paul Chapman (guitar and bass), Neil Carter (keyboards, guitar, bass and vocals) and Andy Parker (drums).

Today, we shall give this record a listen to mark its thirtieth anniversary.


Side one begins with "Blinded By a Lie". The upbeat guitar opening got me raring to go with this song about deceptions. This was one of three tracks that were issued as a flexi-single with FURY magazine in 1983.

Also on that single was the next track. "Diesel in the Dust" is driven by Parker’s pounding percussion. The lyrics tell the tale of a town’s own brand of gruesome vigilante justice.

"A Fool for Love" tells of a woman who has a history of falling for the wrong men and never finds happiness that lasts.

The dark themes of the first few tracks continue on with “You and Me", but this slower ballad provides a glimmer of faith and hope with the solace that comes from a strong relationship.

The single "When It's Time to Rock" reached number 70 on the UK charts. At five-and-a-half minutes, this fist-pumping anthem is the longest cut on the album. It too was included on the FURY single release.

Side two storms in with the high-octane verses of "The Way the Wild Wind Blows".

Carter‘s opening keyboards give "Call My Name", a song about a forbidden love, a bit of a reverent tone.

"All Over You", with its critical tones, is next.

"No Getaway" has an intriguing, moody opening before morphing into a rocking standard. The lyrics tell of a creepy, celebrity stalker who has built up twisted scenarios in his head.

Chapman‘s amazing bass is prominent in the intro to "Push, It's Love", a rapid-fire rocker that closes out the record on a sexually-charged high note.

Because I was not as into hard-rocking records in 1983, this one by UFO went completely unidentified on my music radar. Listening to it today, I certainly enjoyed it and did not find a single clunker in the set. It is solid, steady rocking music.
Posted by Martin Maenza at 4:30 AM