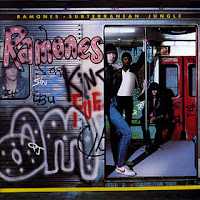 This week marks the thirtieth anniversary of the release of Subterranean Jungle, the seventh studio album by the American punk band the Ramones. Hitting stores on February 28th, 1982, this one peaked at number 83 on the US Billboard Hot 200.

This was the fourth album with the line-up that consisted of Joey Ramone (Jeffry Hyman) on lead, Johnny Ramone (John Cummings) on guitar, Dee Dee Ramone (Douglas Colvin) on bass and vocals, and Marky Ramone (Marc Bell) on drums. This configuration of the band returned again for 1989’s Brain Drain.


Side one opens with “Little Bit o’ Soul”, a cover of the 1964 song written by John Carter and Ken Lewis, recorded first by the Little Darlings in 1965 and later the Music Explosion in 1967. The Ramones manage to stay pretty faithful to the original yet still rough it up a bit with their own edge.

“I Need Your Love” is an up-tempo heart-felt declaration of desire; the song was originally performed by another NYC band called the Boyfriends.

“Outsider”, a song about living a life out of the norm, served as the B-side to the second single.

“What’d Ya Do?” is all about kicking a girl to the curb, but I think the vocal could have had even more bite to it.

The band kicks things into overdrive on the next track, “Highest Trails Above”. This reminds me of the Ramones music of the late 70’s - fast, loud and in your face.

“Somebody Like Me” has a lyric that is very modest; it portrays the singer in a very straight-forward and accessible way.

Side two begins with “Psycho Therapy”, the first single from the album. This is another example that the guys were continuing as the masters at the short musical form; they pack a ton of rocking in just two and a half minutes.

The second single was “Time Has Come Today”, a cover of a 1966 top-20 song by the Chambers Brothers. The band definitely got that whole 60’s vibe with the sound on this one. I like the reverb effect on the vocals on the latter half.

“My-My Kind of Girl” was the B-side to the first single. You can pick up the influences of the doo-wop days of rock on the band with this one.

“In the Park” sums up the activity of just hanging out.

“Time Bomb” is about having pent up teenaged angst, where eventually you just explode. I like how the guitar winds down at the very end.

The album closes with the rather intriguingly titled “Everytime I Eat Vegetables It Makes Me Think of You”, the tale of a guy who pines for a girl who is spending time in jail.

I know I heard a good bit of Subterranean Jungle back during my senior year of high school. Between the local college station and album-oriented rock channel, as well as from my older brother when he returned home from college, there was no escaping the reach of this album. Though I am more of a fan of the Ramones earlier work, this one definitely shows a bit of growth and evolution by the group.
Posted by Martin Maenza at 4:30 AM