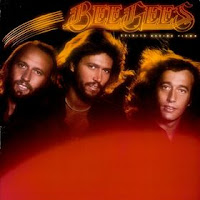 Welcome to another edition of Seventies Saturday. Today also happens to be my birthday so I thought I would review one of my favorite albums from the end of that decade.

On February 5th of 1979 (just a few weeks prior to my fourteenth birthday), the brothers Barry, Robin and Maurice Gibb released Spirits Having Flown, their fifteenth studio album. The album was certified Platinum in both the US and the UK. Chart-wise, it went to number 1 in Australia, Canada, the Netherlands, New Zealand and the UK. In the US, it peaked at number 9 on the Billboard R&B charts and number 1 on the Billboard Hot 200.


Joining the Bee Gees on this album that won the American Music award for Best Pop/Rock Album of 1979 were: Blue Weaver (keyboards), Alan Kendall (bass and guitar), Dennis Bryon (drums) and a multi-piece horn section.

Side one begins with “Tragedy”. As the second single, it went to number 1 in Brazil, Canada, France, Ireland, Italy, New Zealand, Spain, the UK, and the US. It is driven by a heart-thumping bass line, sprinkled with synthesizer riffs and Barry’s signature falsetto vocals. The lyrics dramatically tell of an emotional breakup that leaves you devastated.

The first single “Too Much Heaven” went to number 14 in the Netherlands, number 5 in Australia, number 3 in the UK, and number 1 in Argentina, Brazil, Canada, Chile, Italy, New Zealand, Norway, South Africa, Spain, Sweden and the US. This love ballad is light and airy thanks to the gentle horns, rich strings and the beautiful harmonies of the Brothers Gibb; I get completely lost in this one.

The mid-tempo groove “Love You Inside Out” was released as the third single. It peaked at number 77 in Australia, number 35 in the Netherlands, number 17 in Italy and New Zealand, number 13 in the UK, and number 1 in Canada and the US. It has a funky bass groove that gives it a confident swagger. I like the tempo shift on the bridge to the latter portion of the track.

“Reaching Out” strips things back to simple guitars and harmonies that build to an emotional climax within four minutes.

The title track “Spirits (Having Flown)” closes on the first half of the record. As the fourth single (released outside of North America only), it went to number 35 in the Netherlands, number 16 in the UK and number 14 in Ireland. This one features a Caribbean rhythm to it, most likely influenced by the move of the Gibbs to studios in Florida and the local sounds.

Side two starts with “Search, Find”, a dance track that circles and weaves about the floor with great ease. It includes nods to classic R&B funk from earlier in the decade.

“Stop (Think Again)” is a slow, pained ballad that opens with a lovely organ accompaniment. The sorrowful saxophones then come in to add to the mood. The lyrics are a plea to a lover who has been flirting with another, urging her to really consider her actions before continuing any further down the path that will break them up forever.

“Living Together” roars in with a fanfare of horns and synths. The vocal layers on this track are outstanding; this one again shows that the true power in the Bee Gees’ music is the range and textures of their voices.

The B-side to the third single was “I’m Satisfied”, a reggae flavored track that celebrates sexual bliss in a very PG rated way (it was the 70‘s after all and the Bee Gees were a pretty safe musical act).

The final track “Until” was the B-side to the second single. This ballad closes things out with an interesting and haunting tonal accompaniment.

Following on the heels of the soundtrack of Saturday Night Fever the year before, this album completely cemented my life-long love of the Bee Gees and their music. I received a copy on vinyl for my birthday in 1979. On September 14th of that year, I attended my first and only Bee Gees concert at the Memorial Auditorium in Buffalo, NY. Even though the tour was named for the album, only one track (“Tragedy”) was played at the show. All the rest came from Fever and earlier albums.

Spirits Having Flown remains an all-time favorite of mine over three decades later. That triple-play of hits that opens the first side is amazing. Even though I’ve heard it countless times, this remains one of those albums that are on my must-carry playlists for all my i-devices.
Posted by Martin Maenza at 4:30 AM