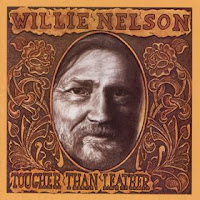 This month marks the thirtieth anniversary of the release of Tougher Than Leather, the thirty-first studio album from American country singer/songwriter Willie Nelson. This 1983 record went to number 39 on the US Billboard Hot 200, number 48 on the Canadian charts, and number 4 on the US Billboard Country charts.

The overall theme of the record is reincarnation, which ties together a number of the tracks into an overall narrative about an Old West gunfighter who comes back in modern times to face karma.


Side one begins with the short prologue “My Love for the Rose”.

“Changing Skies” is the slower transitional piece that tells how the gunfighter’s love for woman whose husband he killed has sustained him across the centuries and two lifetimes.

The title track “Tougher Than Leather” details the events of the killing and how the killer ended up dying many years later. If this whole album were some kind of film, this would be the flashback that came after the previous song being part of the opening credits.

The up-tempo “Little Old Fashioned Karma”, the first single from the album, hit number 20 on the Canadian Country charts and number 10 on the US Billboard Country charts. The band has a lot of fun jamming on this one.

At under a minute, “Somewhere in Texas (Part I)” continues the narrative in modern times with the daydreams of a young cowboy.

“Beer Barrel Polka” was composed in 1927 by Czech musician Jaromir Vejvoda with lyrics added in 1934. I see this instrumental as a continuation of the daydreams, in part, because it is such an old-fashioned song even though it was written long after the days of the American wild west.

Side two starts with the love-longing “Summer of Roses”.

Also under a minute is “Somewhere in Texas (Part II)”, more narrative.

“My Love for the Rose” reprises the opening tune with a second verse for the modern day side of the story.

“The Convict and the Rose” tells of the man on death-row and his regret over the love he lost.

“I Am the Forest” is the next. It is another profession of love, using the symbolism of the man being an empty forest without the woman he loves (who is the trees).

The side, the album and the story ends with “Nobody Slides, My Friend”, a statement that we all must answer for our actions in love and pay those debts we owe, in one form or another.

I was never a huge Willie Nelson fan growing up so I had not heard Tougher Than Leather until this review. I am also a much more visual person, so this whole story gets a little muddy for me just via the lyrics alone. It might make for an interesting short film though.
Posted by Martin Maenza at 4:30 AM