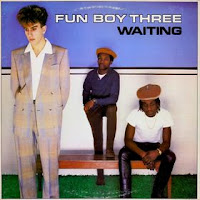 After their self-titled debut album in 1982 (click here for that review), the English pop trio Fun Boy Three (Terry Hall, Neville Staple and Lynval Golding) followed up a year later with Waiting. This second album from February of 1983, produced by David Byrne of Talking Heads, would also be the group's last. It charted at number 104 in the US, number 47 in the Netherlands, number 14 in the UK and number in New Zealand.

The US vinyl release differed in the order of the tracks, most notably by flipping the sides and then swapping around the final tracks on each side. For this review to celebrate its thirtieth anniversary, I will look at the songs in the US order.


Side one opens with "Our Lips Are Sealed", a song Hall co-wrote with Jane Wiedlin (with whom he was having an affair) in 1981. Wiedlin recorded it with the Go-Go's for their 1981 debut album Beauty and the Beat (click here for that review). This version was released as the second single and charted at number 13 in Ireland and number 7 in the UK. Where the hit version by Wiedlin and company seemed more upbeat and celebratory of teenaged rebellion, this version is more dark, secretive and adulterous.

The first single "The Tunnel of Love" went to number 38 in the Netherlands, number 14 in Ireland, and number 10 in the UK. The lyrics tell the tale of a failing marriage and a brutal divorce, all set to a tango rhythm. I remember this one playing a lot on the local college radio station back in 1983. Hearing it again, after all these decades, brought back memories of those times.

"The Pressure of Life (Takes the Weight Off the Body)" has a light, ethereal quality thanks to vocals in a higher range.

Things go down a mundane road with the next track "Things We Do".

"The Farm Yard Connection" tells the story of marijuana growers whose fields are raided by the police. Despite the setback, they keep at their work to pay their bills and put food on the table.

Side two starts with "Murder She Said", a short instrumental piece with a bouncy piano as the centerpiece.

"The More I See (The Less I Believe)" is a natural extension of the previous piece rhythmically. The lyrics paint a pessimistic viewpoint of world events at the time, in particular war.

"Going Home", a song about questioning one’s country of residence and loyalty, has a reggae swing to it.

"We're Having All the Fun" focuses on mundane lives and the acceptance of those lots.

The carefree carnival waltz of "Well Fancy That!" counterbalances the dark tale of a victim of molestation.

On Waiting, Fun Boy Three constructs some amazing musical arrangements and lyrics that leave the listener with something to think about. It is a shame the group only lasted for a few years, but they left behind two very solid albums.