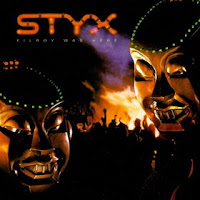 This week (February 28th) marks the thirtieth anniversary of the release of Kilroy Was Here, the eleventh studio album from American rock band Styx. The title of this Platinum seller comes from a famous piece of graffiti from World War II. The record charted at number 67 in the UK, number 6 in Sweden, and number 3 in both Norway and on the US Billboard Hot 200.


Side one begins with “Mr. Roboto”, the first single from the album. It charted at number 90 in the UK, number 8 in Germany and number 3 on both the US Billboard Hot 100 and the Billboard Mainstream Rock charts. The futuristic synthesizer sounds that open the track set the tone for this sci-fi concept album about a rogue rocker Kilroy who is imprisoned. The percussion also adds an industrial mechanized feel as well. And, of course, the repeated line “Dōmo arigatō, Mr. Roboto” quickly became a catchphrase in high school and college at the time.

“Cold War” has a catchy hook made up of the clap-along synth riffs. It is the first of the deep tracks here that I instantly liked upon first hearing it.

The second single “Don’t Let It End” peaked at number 70 in Germany, number 56 in the UK and number 6 on the US Billboard Hot 100. The ballad is a plea from a man to his lover to reconsider the termination of their relationship. Quite ironically, this one became a big slow dance favorite in the year that followed as that was often the time in evening we teens were trying to seal the deal on the dance floor. In that respect, we did not want the dance and night to end.

“High Time” was released as the third single from the album; it stalled at number 48 on the US Billboard Hot 100. Panozzo’s rolling drums and the blaring horns set the tempo for this one, a swaggering number that I am struggling to recall from my radio listening days of 1983. It definitely falls into that category of “lost tracks”.

Side two starts with “Heavy Metal Poisoning” with Young doing the vocal leads. This one has a strong rocking edge to it with some grinding guitars.

“Just Get Through This Night” has a very different opening that brings to mind Eastern music, particularly from Japan. Shaw does the vocal duties on the dramatic, multi-layered ballad.

Young returns to the lead vocals for the next track. “Double Life” served as the B-side to the third single.

Shaw‘s “Haven’t We Been Here Before” slows things down once more with a pained, emotional note.

“Don’t Let It End (reprise)” closes out this record with a return to both the titled track and some refrains from “Mr. Roboto” as well.

While I did not own a copy of Kilroy Was Here on vinyl, my freshmen year college roommate Steve did have it and often played it in our dorm room. Styx may have gotten some grief for this record and its over-reaching story arc, but I think it works pretty well. I know I certainly enjoy listening to it three decades later.
Posted by Martin Maenza at 4:30 AM