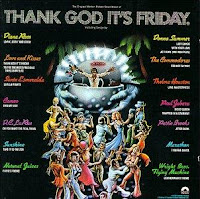 Continuing on with my birthday weekend celebration, I thought I would dig back into the movie music vaults for another disco classic. This time, we are looking at the soundtrack to the film Thank God It’s Friday which hit the theaters on May 19th, 1978.

The movie tells several intertwining stories of the patrons and staff at a fictional Los Angeles disco club called the Zoo (a real LA club called Osko's on South La Cienega Blvd. was used for the set). It starred Jeff Goldblum, Debra Winger, Valerie Landsburg (who would later star on the TV show Fame), Terri Nunn (of Berlin), and singers Paul Jabara and Donna Summer.


The soundtrack, released a month prior to the film’s debut, was a triple disk set which did quite well on the charts. It also featured some of the biggest names in disco music at the time.

Pattie Brooks, a former back-up singer since the late 60’s, is up next with the nearly eight-minute “After Dark”. This track features a solid disco, salsa rhythm. Proving to be a popular club track thanks to the film, Brooks added it to her second album Our Ms. Brooks later that year.

Donna Summer checks in with her first song of the album - “With Your Love”. The keyboards make an interesting sound during the song’s intro.

Summer follows it up with an eight-minute version of “Last Dance”, a disco classic. This track won the Academy Award for Best Song in 1979 and the Golden Globe for Best Original Song. On the charts, it went to number 69 in Australia, number 51 in the UK, number 42 on the US Adult Contemporary chart, number 16 in Sweden, number 10 in the Netherlands, number 5 on the US Billboard R&B chart, number 3 in New Zealand and on the US Billboard Hot 100, and number 1 on the US Billboard Dance charts. I have always liked how it starts out as a ballad before exploding into a full-blown dance event, a style that Summer would use again a number of times later over the coming years.

Side two begins “Disco Queen”, Paul Jabara’s ode to the ladies that ruled the dance floors.

Cameo had just made their debut album Cardiac Arrest a year prior, so appearing on this sound track was a big career boost for them. “Find My Way” reached number 3 on the US Billboard Dance charts in 1977. Nathan Leftenant is featured prominently on the trumpet here.

The Commodores are up next with “Too Hot Ta Trot”, a single that went to number 38 in the UK, number 24 on the US Billboard Hot 100 and number 1 on the US Billboard R&B chart. With this song all over the radio waves, it definitely helped to get this catch-phrase to cross over into mainstream culture.

“Leatherman’s Theme” is an instrumental track performed by Wright Bros. Flying Machine. The group had a self-titled album that was also released in 1978, and it features an extended version of the song that appeared here.

Marathon’s “I Wanna Dance” has a high-energy swing to it. This single was the trio’s first recorded song.

Side three features a trio of extended length tunes. Sunshine kicks things off with “Take It to the Zoo”, an eight-minute song which went all the way to number 1 on the US Billboard Dance chart. The group was made up of Donna Summer’s sisters: Linda, Dana, Jenette and Mary Ellen. There were plans for a full-length album but they never came to completion.

The French-American group Santa Esmeralda who had a hit a year before with “Don’t Let Me Be Misunderstood” appears next. The instrumental “Sevilla Nights” features similar Latin rhythms.

Love & Kisses is back for more with “You’re the Most Precious Thing in My Life”.

Side four starts off with “Do You Want the Real Thing” by D.C. LaRue. Born David Charles L’Heureux, he had a number of disco albums prior to this film. This song has a smooth, seductive rhythm to it.

Jabara returns with “Trapped in a Stairway”, a more pop flavored tune. It does add a little variety to the mix which is always welcome.

Natural Juices gives us the instrumental “Floyd’s Theme”; it was the group‘s only recorded track.

Diana Ross is next with “Lovin’ Livin’ and Givin’”, a track she would also put on her album Ross which came out in September of 1978. This one has a bit of a sci-fi sound to it, really incorporating the synthesizer sound to it.

Thelma Houston presents “Love Masterpiece”. It opens with a classical piano part before moving into an up-tempo dance explosion.

Summer returns for a shorter reprise of “Last Dance”.

The third disk of the record is a twelve inch single of Summer’s “Je T’Aime (Moi non Plus)” a nearly sixteen minute musical epic. This is a disco cover of a song first recorded by Jane Birkin and Serge Gainsbourg in 1969; the title translates from French to mean “I love you… me neither”); back then, the song’s eroticism was considered highly offensive with lyrics of a very detailed, sexual nature. Summer performs her version also in French, complete with her breathlessly seductive, orgasmic groans.

I did not see Thank God It’s Friday in the theatres, however I was all over it when we got HBO a year or so later. I found the movie on cable television over the holidays and watched it again; it was like an episode of The Love Boat set in a dance club. Very dated. As a disco fan, I still enjoy the music from the film though.
Posted by Martin Maenza at 4:30 AM