Bow Wow Wow - When the Going Gets Tough, the Tough Get Going 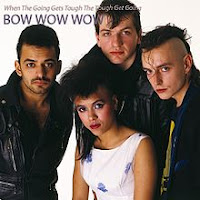 Following their 1982 EP Last of the Mohicans (click here for that review), the English new-wave band Bow Wow Wow released their third and final studio album. Today we will celebrate the thirtieth anniversary of the release of 1983’s When the Going Gets Tough, the Tough Get Going, a record which peaked at number 82 on the US Billboard Hot 200.


Side one opens with “Aphrodisiac”. I love the give and take between the guitars (Matthew Ashman and Leigh Gorman), the drums (David Barbarossa) and the vocals (Annabella Lwin) on this one.

“Do You Wanna Hold Me?” was released as a first single to correspond with the album’s release in February of that year. The song peaked at number 77 on the US Billboard Hot 100, number 47 in the UK and number 3 in the Netherlands. The music has a bit of a California surf-rock sound which works ironically as some of the lyrics slam the illusion images that sunny state.

“Roustabout”, as you would expect by the title, has a rough-and-tumble, quick-tempo rhythm to it.

“Lonesome Tonight” continues on a similar beat as Lwin agonizes about being on her own.

The impassioned plea of “Love Me” is the next track on the album.

“What’s the Time (Hey Buddy)” was chosen for the B-side of the first single. Barbarossa’s beats set the pace on this one and, at times, really makes the rest of the band work hard to keep up.

Side two begins with “Mario (Your Own Way to Paradise)”, the story of a conflicted young man from a troubled home.

“Quiver (Arrows in My)” is an up-tempo track with an aura of sexually charged energy.

“The Man Mountain” charted at number 8 in the Netherlands. It changes things up a bit with a more folk vibe to it - very laid back and reserved.

“Rikki Dee” tells the tale of an arrogant personality that works at the W.C.

What follows next is “Tommy Tucker” that tells the tale of a very religious young man. It uses some of the famous nursery rhyme as part of the lyrics.

“Love, Peace and Harmony” closes the record with the fever-pitch chanting of this song’s title.

I always liked Bow Wow Wow, even back in the early 80's. So When the Going Gets Tough, the Tough Get Going is sort of bitter-sweet. I certainly would have liked to see the band continue beyond three albums, but sometimes groups just shine for awhile and then go away. At least Bow Wow Wow left a chunk of great music in the archives of 80's new-wave history.