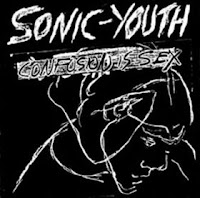 After their self-titled 1982 EP release (click here for that review), Sonic Youth returned in February of 1983 with Confusion Is Sex, their second studio album. On this album, Kim Gordon, Thurston Moore and Lee Ranaldo were joined by Jim Sclavunos on drums; he left the group during the recording process so Bob Bert filled in on two tracks.

Today we will give this one a listen in honor of its thirtieth anniversary.


Side one starts with “(She’s in A) Bad Mood”. The opening guitar sounds like clocks or bells clanging continuously, followed by a lot of feedback. Moore, who wrote this one as well, performs the vocals here about one who won’t be taken in by his girlfriend’s negativity. In listening to this track for the review, I can’t help but recall somewhere in the back of my mind that I had heard this one before. I am sure the local college station played it. It has one of those lyrics that just sort of sticks with you. I find the sound building to a crescendo pitch near the end interesting, like an explosion building. The reverb bouncing from speaker to speaker at the end is cool too.

“Protect Me You” is next. Gordon, who wrote this one, delivers this one with a cold, emotionless vocal. It is if the fear she should be experiencing has put her into some kind of trance. The music does build in intensity and then fades out to nothing.

The mash-up of “Freezer Burn / I Wanna Be Your Dog” is next. The first half is a tonal assault that reminds me of those ear tests the doctor gives you during your annual physical. The latter half is a cover of a song by the Stooges that appeared on their 1969 self-titled debut. The two parts do not mesh cleanly at all but that was likely the intent.

“Shaking Hell” is the first track on side one that has a decent drum rhythm. It helps set the pace for the guitars and vocals to follow. This one has a vibe more reminiscent of some Romeo Void, with Gordon really putting some emotion behind her vocals. You can feel her fear.

One really has to work to distinguish the lyrics of “Inhuman” over the frantic music, which I liked.

Side two begins with “The World Looks Red”, an end-of-the-world track with an interesting sci-fi edge to it musically.

“Confusion Is Next” is a beat-poem with clanging guitars thrown in. It does not work for me at all.

“Making the Nature Scene” opens with a very promising tempo and rhythm to it.

The closing track, an instrumental entitled “Lee Is Free”, opens with guitars that sound like wind-chimes. The choice to skip lyrics here really works and makes it more of an experimental musical piece.

As this was the second Sonic Youth album I have listened to in as many months, I have to say I did not prefer this one as much as the previous one. Confusion Is Sex has some very strong instrumental moments but the vocals and lyrics tend to leave me rather cold. In a few cases, I think some of the tracks would have been best served to just let the instruments do the talking.
Posted by Martin Maenza at 4:30 AM