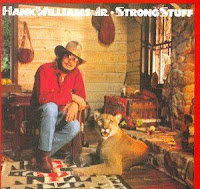 This month marks the thirtieth anniversary of the release of Strong Stuff, the thirty-fifth studio album from American country singer Hank Williams, Jr. The Gold selling album reached number 64 on the US Billboard Hot 200 and number 7 on the US Billboard Country charts.


Side one opens with “Gonna Go Huntin’ Tonight”. This first single, which preceded the album release, went to number 4 on both the US Billboard Country and Canadian Country charts. This high-energy, party tune is about trolling honky-tonks and looking for some action.

Next up is a cover of ZZ Top‘s “La Grange”, which appeared on their 1973 album Tres Hombres. The song is an ode to the bordello just outside of La Grange, Texas, that later became famous under the name the “Chicken Ranch” as the subject of the Broadway play and later film The Best Little Whorehouse in Texas. Now, this is a ZZ signature tune but I have to give Williams and his band props for doing a solid rendition.

“A Whole Lot of Hank”, a celebration of the country rebel spirit, is next.

“Made in the Shade” was written by Ronnie Van Zant and recorded on Lynyrd Skynyrd’s third studio album Nuthin’ Fancy from 1975. This country-blues cover is about an ungrateful woman who cannot see the good in her relationship.

Williams gets some musical assistance from Waylon Jennings and Ernest Tubb on “Leave Them Boys Alone”. As the second single, it peaked at number 7 on the Canadian Country chart and number 6 on the US Billboard Country chart. This song about the media hassling Williams and Jennings for their off-stage activities has a classic, down-home swing to it.

Side two begins with “The Girl on the Front Row at Fort Worth”, the B-side to the second single. It tells the tale of how one concert go-er in a sea of ten thousand attracts the attention of the singer on stage.

“The Homecoming Queen” tells the tale of a girl who graduated in the class of 1972 whom the singer meets at concert and makes his wife. She is always there for him, whenever he returns from the road.

Williams covers another ZZ Top track with “Blue Jean Blues”, which appeared on the studio side of the 1975 album Fandango. This version definitely has a darker, foreboding edge to it. The saxophone solo adds a smoky, urban feel to it too.

“Twodot Montana” was the B-side to the first single. The rhythm has a country-waltz sway.

“In the Arms of Cocaine” is in-depth look at the grip of drug addiction and how it can affect a relationship.

I had not heard any of Strong Stuff prior to doing this review, but I have to say it was a great place to start. I enjoyed each track here by Williams and his band, especially the covers to songs I was very familiar. There are certainly tracks here I will be adding to my downloads library in the very near future.
Posted by Martin Maenza at 4:30 AM