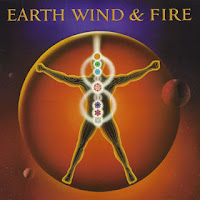 After a strong 1981 release Raise! (click here for that review), the R&B group Earth, Wind & Fire followed it up in 1983 with Powerlight, their twelfth studio album. Today (February 7th) marks the thirtieth anniversary of that release. Though it only charted at number 82 in Australia, it reached number 24 in Canada, number 22 in the UK, number 12 on the US Billboard Hot 200, and number 4 on the US Billboard R&B chart.

Side one begins with the synthesized announcing anthems of "Fall in Love With Me". Nominated for a Grammy for Best R&B Vocal Performance by a Duo or Group, this first single went to number 31 on the US Dance chart, number 17 on the Billboard Hot 100 and number 4 on the R&B charts. It also hit number 49 in New Zealand, number 47 in the UK, number 12 in the Netherlands and number 12 in Canada. I am big fan of this one’s steady dance beat and powerful horns, to signature elements in the band’s arsenal.

The third single "Spread Your Love" peaked at number 57 on the US Billboard R&B charts and number 48 in the Netherlands. The lyrics of this high energy dance tune contain a message of unity and brotherhood among the members of the human race.

Things shift down to a slower groove with "Side by Side", a celebration of togetherness. As the second single, it stalled at number 76 on the US Billboard Hot 100 but climbed all the way to number 15 on the R&B charts. The guys get an additional vocal assist from Ms. Pluto which provides a softer side to the harmonies. Robert Greenidge is featured on the steel drums on this track as well.

After a solid three-punch of hits, the side closes with "Straight From the Heart". Maxanne Lewis provides the lovely piano parts here, backed by rich strings and harmonious horns.

Side two blasts off with "The Speed of Love", another funky dance groove.

The party continues with the next track, driven by White‘s tight bass groove. "Freedom of Choice" served as the B-side to the third single.

The B-side for the second single was "Something Special", a smooth celebration of love. In 1997, Will Smith used a sample of this song for the title track of his album Big Willie Style.

"Hearts to Heart" brings back the dance party with a positive message of inspiration.

The lullaby melodies of "Miracles" close off the album. It is an interesting piece compared to the rest of the record everything is pulled back for the first half of the track, keeping it simple yet still strong.

I have nominated you for a Liebster Blog Award, the details can be found here: http://caffeineandchapters.blogspot.com.au/2013/02/the-liebster-award.html please don't feel obligated, it is just a bit of fun :)