The Cars - The Cars 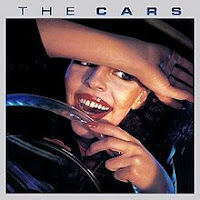 I thought I would treat everyone to a second helping of "Seventies Saturday" this week.

It's not surprising that a lot of debut albums ended up on the "1001 Albums You Must Hear Before You Die" and on Rolling Stone's Top 500 Albums of All-Time. There are quite a number of outstanding first records by bands in the history of rock and roll. The Cars 1978 debut (released on June 6th) falls into that category (it appears at #279 on the Rolling Stone list).


This album was all over album rock stations ever since its release. The nine tracks are each solid in their own way, and they helped make the new-wave American rock band popular on the late 70's and early 80's.

Side one starts with "Let the Good Times Roll" with its signature guitar riff. The song was released as the third single of the album yet failed to break into the top 40 on the US charts. This one was great for the opening track on party mix tapes as everyone wanted to get the good times rolling.

"My Best Friend's Girl" was the second single from the album and it managed to reach #35 on the US charts. The guitar and hand-clap combo at the start is infectious.

"Just What I Needed" was the first single from the album and the highest climber on the US charts (it got all the way up to 27).

"I'm In Touch With Your World" is next. It is probably my least favorite of the tracks; I find it just a little bit too boring compared to the others. I don't think I was the only one - I don't seem to recall this one getting as much airplay on the AOR stations as the other eight.

The side ends with "Don't Cha Stop" which thankfully picks the pace back up. In some ways, this one reminds me a bit of songs by Sparks, another new-wave band that got its start in the late 70's.

Side two kicks off with "You're All I've Got Tonight".

"Moving In Stereo" has that unique reputation of being the song played in one of the most familiar scenes in the film Fast Times At Ridgemont High, the one where Phoebe Cates emerges from the swimming pool. Ironically, the song is not on the film's soundtrack. A pity.

The album ends with "All Mixed Up", the other track that didn't make a lasting impression on me after all these years (they can't all do that).

For me, this album takes me back to my high school days. It was a mainstay of dances and parties, even years after its debut. The songs were very much part of the soundtrack of those later days of adolescence for me and my classmates. The band's signature sound was also an indicator of the music to come - a nice transition between classic rock and the new wave movement.
Posted by Martin Maenza at 7:33 PM

I can't believe "Best Friend's Girl" did so poorly on the charts -- well, poorly compared to how much it's still in the regular rotation.

Maybe it strikes a chord with me since I am always falling in love with people's wives and girlfriends.

Just got this one on vinyl as well. It amazes me...this album plays like a "Greatest Hits" type record. So many well known songs here.

You just don't see albums like this anymore, so many solid tracks. MJ's "Thriller" is another one.

for the last 20 years or so, it is the trademark of all albums to have the big hit, perhaps a decent follow up, then the third single that kind of makes a slight dent in the charts. This Cars album goes back to a time when artists really brought quality. Great album, this one.

and a great review, thanks

10DD, this does have so many good, known tracks. Folks probably don't realize so many came from one awesome debut.

Oh, and Hatter, I get you about "Best Friend's Girl". We've all sung that one a time or two, myself included.