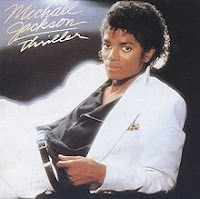 So much has already been said (and can still be said) about Michael Jackson's November 30th, 1982 release Thriller. This was his sixth solo album and without a doubt his most successful. It ranks as number 20 on the Rolling Stone 500 Greatest Albums of All Time list and as number 7 in their Top 100 Albums of the 80's list, and it appears on the 1001 Albums You Must Listen To Before You Die list.


Side one kicks off with my favorite song from the album - "Wanna Be Startin' Somethin'". In a lot of ways, it reminds me of the dance tracks from Jackson's previous album Off the Wall (click here for that review). This song was released as the third single from the album; it reached number 5 on the US Billboard Hot 100 and the R&B charts. It also hit number 35 in New Zealand, number 30 in Switzerland, number 25 in Australia and Denmark, number 14 in Italy and number 8 in the UK. I like the confrontational attitude here.

"Baby Be Mine" is next, a slower tempo track. It is my least favorite track on the album.

Next up is "The Girl Is Mine", a duet with Paul McCartney and the first single from the album. It reached number 2 on Billboard Hot 100 and number 1 on both the R&B and Adult Contemporary charts. This song was the first of two duets these two pop super-stars did ("Say Say Say" was released a year later on Paul's Pipes of Peace album). I have to admit I like the later of the two slightly more, but both are equally good.

The side ends with "Thriller" which was actually the final single release on the album (it only reached number 4 on US Billboard Hot 100 however it did go to number 1 in Belgium, France, Spain and on the US Dance Charts). This song was really propelled by the outstanding music video. I remember very vividly waiting in anticipation to see it on "Friday Night Videos", a late night music-video show that ran in the US in 1983. This is often how we saw videos before MTV was available in our cable market. I do remember that MTV did play the heck out of it too. It was just that innovative. The video and the song are part of the pop-culture fabric now, having been used in homages and spoofs in many a TV show. I love Vincent Price's appearance on this track at the end.

Side two kicks off with "Beat It", the number one Billboard hit that includes guest Eddie Van Halen on guitar. This was also the 1983 Grammy Record of the Year winner. The track also hit number 1 in the Netherlands, New Zealand and Spain.

It is followed by "Billie Jean" which also reached number 1 on the Billboard charts. Around the world, it hit number 1 in Australia, Canada, Ireland, Italy, Switzerland, and the UK. Of these first two tracks on side two, I prefer "Billie Jean" more - much easier to dance to. The lyrics focus on groupies that musicians like Jackson often have to deal with.

"Human Nature" slows things down. This song reached number 7 on the Billboard charts.

"P.Y.T. (Pretty Young Thing)", the sixth single, picks the tempo back up nicely for a final dance jam. It went to number 40 in Australia, number 24 in Canada, number 14 in the Netherlands, number 11 in the UK and number 10 on the US Billboard Hot 100. The track was written by James Ingram and album producer Quincy Jones.

The side and album then ends on a slow note with the ballad "The Lady In My Life".

Like a majority of people back in 1982, I owned Thriller on vinyl. Because it was full of so many songs that became hits (a very high percentage with seven out of nine released as singles), these tunes became part of the soundtrack of my Senior year of high school and were still very prevalent during my Freshmen year of college. They're classics in every sense of the word and have come represent music from the early part of the 80's. For me, this is one of the best examples of a pop/R&B album, solid pretty much from beginning to end. I'd easily rank it in my top 25 albums of the 80's.
Posted by Martin Maenza at 5:21 AM