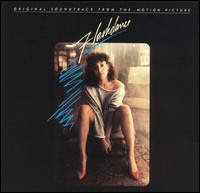 Welcome back to "Soundtrack Sunday".

The 80's was known for producing a number of popular film soundtracks that climbed up the charts. And in 1983, one of those albums was the soundtrack to Flashdance, the story of female welder at a steel mill (played by Jennifer Beals) who aspired to be a professional dancer. The film opened in theatres on April 15th of that year.


The album was a world-wide smash. It charted at number 9 in the UK, and number 1 in Australia, Austria, Japan, Norway, Sweden, Switzerland and on the US Billboard Hot 200. It went multi-platinum in sales the world over as well.

Side one opens with the title track "Flashdance...What A Feeling" by Irene Cara, no stranger to soundtracks (she provided a number of songs for the Fame film in which she also starred three years prior). The song opens with a slow, softness and builds into a grand anthem. The song was very popular at the time, played many times a day on radio stations. It reached number 1 on the US Billboard charts and won the Academy Award that year for Best Original Song. It also peaked at number 2 in the UK.

Next up is "He's A Dream" by Shandi Sinnamon. It has a nice rock feel to it with sultry and agressive vocals.

Continuing the female empowerment theme, the album gives us Karen Kamon and "Manhunt". This sounds a lot like a song that you would have heard sung by Donna Summer in the early 80's.

The side ends with "Lady, Lady, Lady" by Joe Esposito. His voice and the song have a typical early 80's pop-ballad feel to them, and that's a compliment (the song is pleasant). It peaked at number 86 on the US Billboard Hot 100.

Side two starts off with "Imagination" by Laura Branigan, another female main-staple of early 80's pop charts. I have always liked Laura's voice and her catalog of songs. This is a good one, easily one of my favorite of the non-hit tracks from the album.

Next up, we get the aforementioned Donna Summer with "Romeo". No surprise really since the man who produced many of her biggest hits - Giorgio Moroder - has his fingerprints all over many of the songs on this platter. This song a new-wave feel to it, which is different from what you usually expect from Donna but works very well.

"Seduce Me Tonight" by Cycle V is next, adding a little more of a rocking vibe to it. This song was popular at the time, even though it didn't chart into the top 40. It is one of those songs that would work great in a mix-tape because it isn't something you hear that often.

Next we hear from Kim Carnes, yet another of the 80's female chart busters (clearly this album wouldn't have been complete without her). "I'll Be Here Where the Heart Is" gives us a ballad, perfect for those inevitable slow dances. Again, another nice surprise for those 80's mix-tapes if you're looking for something other than the usual suspects.

The album ends with the other number 1 US Billboard hit, Michael Sembello's "Maniac". It starts out with that driving beat and rhythm and doesn't let go. You can't help but want to dance when you hear it - I know I can't resist it. Hearing it takes me right back to bouncing around my bedroom as a teen whenever the song came on the radio. This one was a huge dance hit at the time, and it is easily my favorite song from the album. It bookends "Flashdance...What A Feeling" very nicely, ending the record on as solid of a note as it started.

I have to admit that, while I have the soundtrack which I like, I have never actually seen the film Flashdance. I guess I never really had an interest when it first came out in theatres and have never actively sought it out on cable in the decades since. Maybe someday I'll actually see it, so I can see how the songs fit into the context of the story line. In the meantime, I have the music which is all good.
Posted by Martin Maenza at 8:30 AM

All I have to say, since Friday is a day for feeling shallow:

Who knew Jennifer B would turn out to be such a hot cougar and a great actress on The L Word and the dearly departed Chicago Code?