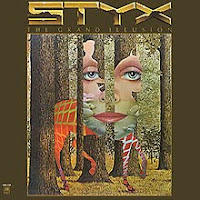 Welcome back for another edition of "Seventies Saturday".

In 1977, the American band Styx released their 7th studio album. All those sevens were very lucky for them indeed as the Grand Illusion was the first of their albums to reach Triple Platinum sales and earned them one top 10 single and another top 30 single on the US charts. My older brother who was in high school at the time had it on vinyl, so I heard it a lot at home. Yet even the kids at the junior high school I went to were into it as well. Some consider it Styx's breakthru album, the one that propelled them into superstar status. It is certainly a memorable album from that year and the decade.

Side one is about as perfect as any first side of an album can get. All of these songs could be heard heavily on the radio at the time (and for many years afterwards), leaving a permanent impression on our collective musical landscapes.

The album opens with the fanfare of "the Grand Illusion"; that's Tommy Shaw and James Young on guitars. You can almost see a carnival barker addressing a crowd eager to spend their money. The song is theatric with a solid prog-rock feel to it. The theme is a simple one of overcoming self-delusion and affirming who we really inside. It is a theme that extends over a number of the album's tracks.

Next is "Fooling Yourself (the Angry Young Man)", a title that is fairly self-explanatory really; it is a message that being angry at the world is pointless and will not solve your problems. Again, another awesome opening - this time with Dennis DeYoung on synthesizers. This is one of those songs I know the lyrics by heart and often would sing along to. The song reached number 29 on the US singles charts in April 1978.

"Superstars" is one of those songs I haven't heard for a long time (I downloaded it earlier this week and it was like welcoming an old friend). It is about a singer who rose to stardom yet knows he is no different than the fan in the 14th row (same dreams and aspirations). The melodies on this one are outstanding, just like the other songs. Again, this is another one of those songs I like to sing along to on the chorus.

"Come Sail Away" was the big hit from the record, reaching number 8 in late October of 1977. This song is one of discovery, and it is just so beautiful. The first part is like a minstrel's song with the piano and orchestration. It then explodes in the second half with its rock and space-aged sounds. Again, another song I know by heart and can't help but sing along too. Heck, even Eric Cartman knows the words to this one (come on, you've seen the South Park episode, right?). It was also used nicely in an episode of Freaks and Geeks. It is a pop-culture landmark that cannot be denied.

I have to admit that the side two tracks are quite a bit less familiar to me. I don't think my brother played them as often. I don't recall them as much on the radio either.

"Miss America" opens up side two. I have a live version of this one in my library. It is a decent rocking song that takes a swipe at beauty pageant winners and the image they have to portray to get there. "Man In the Wilderness" and "Castle Walls" are my least favorite tracks - most likely because they are the ones I've heard the least over the decades. Musically though they are very solid compositions. I'm sure they were amazing in concert.

The album ends with "the Grand Finale", a two minute reprise if you will of the opening album song. It serves as closure to the concepts of the albums, bringing the listener right back around to where we started, much like a Broadway show might do.

I like this album a lot. It can take me back to my early teenaged days very quickly. Still, it is a solid album that has stood the test of time to be one of the many classics to come out of the 70's.

What do you think?
Posted by Martin Maenza at 7:54 AM