Grandmaster Flash and the Furious Five - the Message 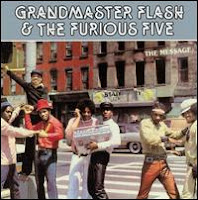 I grew up in a small western New York town on the shores of Lake Erie. I knew very little about urban life except for what I saw on TV on shows like "Good Times" and big city police dramas in the 70's. I only knew a couple black kids (yes, that's the term we used back then - before the days of political correctness) from elementary school but they moved away by the late 70's. In junior high I got to know my first Hispanic people (our town had a growing Puerto Rican population).

When it came to exposure to R&B, soul or even the up-and-coming rap/street-music styles, again my only real expsoure was television and the radio. Then in 1982 while listening to the local college radio station, I discovered a lot more. One of those discoveries was Grandmaster Flash and the Furious Five with their debut album the Message.

Side one is a full-out celebration with a trio of upbeat tunes. "She's Fresh" is pure R&B/funk that sounds right at home at any early 80's house party. "It's Nasty" samples the Tom Tom Club's "Genius of Love" for its baseline, allowing the guys to put some old school raps over a recent dance club favorite. "Scorpio" is solid electronic-funk in the same vein as Newcleus.

The guys move to the social commentary with the track "It's A Shame". The sample here is a classic though. "Dreamin'" drops the tempo down with a fairly standard slow jam. "You Are" continues along that same vein. While I appreciate the varying styles here, these aren't really the songs I typically associate with this group. You can tell this is their debut album with a lot of the group providing input as to what they wanted to see on the record. It leads to a hodge-podge though.

The real star of this album is the last track - "the Message". This song was huge release, with the single going platinum in just one month. Everybody who was into club music and the now-growing popular hip-hop/rap genre had this record. I had the 12 inch single on Sugar Hill Records. It ranked as number 51 on Rolling Stone's 500 Greatest Songs of All Time (the highest placing song of any released in the 1980's and the highest ranking hip-hop song on the list). The lyrics paint a detailed picture of life in the ghettos at the time (and yet the lyrics are still relevant today). This is one of those songs that I know by heart and will "rap along" to any time I'm listening to it aloud.

The original vinyl for the album The Message stopped at those seven tracks. But later CD releases added "the Adventures of Grandmaster Flash on the Wheels of Steel', a track that showcases his supreme sampling skills by cutting in some well-known songs; "the Message II (Survival)", a worthy sequel to the "the Message"; and "New York New York", yet another rap classic social commentary by the group. These two along with "the Message" are the first songs I think of when I hear Grandmaster Flash. They really stuck with me, even after almost thirty years from their original release.
Posted by Martin Maenza at 5:23 AM

This is a good blog. Keep up all the work. I too love blogging and expressing my opinions