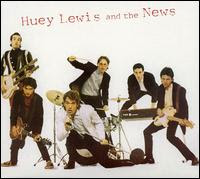 The San Francisco based band Huey Lewis and the News started out as a six piece combo. Huey Lewis lead the group with vocals and harmonica, with Bill Gibson on percussion and Sean Hopper on keyboards. On lead guitar was Chris Hayes, on bass was Mario Cipollina, and on rhythm guitar and saxophone was Johnny Colla.

They recorded their self-titled debut album Huey Lewis and the News in December of 1979 and released it on June 25th of 1980. As such, it straddled two decades - the departing disco-tinged 70's and the growing new-wave 80's. The band had more rock and blues roots, so they really didn't fit either of those styles - though they did try to touch upon the new-wave vein a little with this album.

Huey Lewis and the News didn't chart well in any of the major markets (the US, UK, etc.) but clearly their label Chrysalis Records saw potential in the band. It spent three weeks on the US Billboard Album chart, peaking at number 203.


Side one opens with "Some of My Lies Are True (Sooner or Later)", the first single. The song, with its up-beat tempo driven by the guitars, is about betraying friends and enemies alike.

"Don't Make Me Do It" opens with a strong, clap-along beat and features a nice guitar solo.

"Stop Trying" continues the up-tempo flow going. The chorus is interesting here as it is a hushed harmony by the guys.

"Now Here's You" was the second single from the album. The piano/saxophone opening sets up the bounce along tempo about a girl who comes into a guy's life unexpectedly and turns it upside down.

"I Want You" is a straight-forward declaration of desire to move a relationship to the next level, to get to know one another intimately.

Side two begins with "Don't Ever Tell Me That You Love Me", the B-side to the first single. In this one I can see more of a spark that would come with their next album in 1982. The rapid-fire rhythm mixes touches of new-wave with classic rock very well.

"Hearts" follows with a pessimistic view on love.

The next track is "Trouble In Paradise" which is my favorite from this album. I first heard this song as the live version on the We Are The World album ; it was the band's contribution to that mega release for charity. This version isn't as energetic as the live one (the band clearly feeds off the crowd when they perform) but it is still a strong song about a man returning home from war to a cold reception.

"Who Cares?" has that new-wave rock edge to it, again thanks to a rapid-fire rhythm in both the music and the lyrical delivery by Lewis. This would have made for a great single if not for the one profane word used a few times. The guitar solo smokes.

"If You Really Love Me You'll Let Me" is my second favorite track from the album. I like the high energy of it as well. The second side of the album is definitely stronger.

For me, Huey Lewis and the News is good for a debut release on a major label. A number of the songs have a very similar feel to them, making them tend to blur together on the initial pass. If you were listening to this back in 1980, you could tell the band had a good sound (and could be huge with the right material). No doubt they were a great band to see live even in those early days; that's often how undiscovered talent got a chance to cut a disk. Remember too this was a year prior to the debut of MTV, and once that medium came into being Huey Lewis and the News would be able to capitalize on that (their videos for later material always had elements of humor and fun to them - which helped bolster the band's image).

I'd recommend this album mostly to folks who are already big fans of the band, especially if they love their next couple albums after this one: Picture This, Sports and Fore! like I do.
Posted by Martin Maenza at 2:32 PM