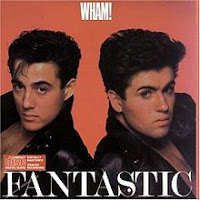 Before Wham! “made it big” with their second studio album, George Michael and Andrew Ridgeley (along with over a dozen musicians and a few back-up singers) released their 1983 debut album (on July 9th) that was - appropriately titled - Fantastic. Powered by a trio of singles that quickly became dance club favorites, the duo was soon on their way to international super-stardom.

The album charted at number 83 on the US Billboard Hot 200, eventually going Gold. It also reached number 25 in Switzerland, number 17 in Japan, number 15 in Sweden, number 8 in the Netherlands and Norway, number 7 in Germany, number 5 in Australia, and number 1 in the UK (where it went triple Platinum in sales).


Side one kicks off with “Bad Boys” and a hardy woo-woo. It is a fun little song about teenage rebellion, in the most non-threatening way possible. Still, a very good beat and easy to dance to. As the third single, it charted at number 60 on the US Billboard Hot 100, number 26 in the Netherlands, number 12 in Germany, number 11 in Sweden, number 10 in New Zealand, number 9 in Australia, number 8 in Norway, number 6 in Switzerland, number 3 in Ireland, and number 2 in the UK.

“Ray of Sunshine” continues the dance party with its syncopated rhythm that is reminiscent of the disco trend years earlier.

That same feel continues with the next track, a cover of the 1976 number-one single by the Miracles - “Love Machine”. The boys do a decent job with it, capturing the sound and feel of the original while also putting their own touches to it.

The side ends with “Wham! Rap (Enjoy What You Do)”, the nearly seven minute dance anthem. As the second single, it went ot number 18 in New Zealand, number 17 in Germany, number 13 in Ireland, number 9 in Australia and the Netherlands, number 8 in the UK, and number 7 in France. I can probably do this rap in my sleep, having “sung” it under my breathe so many times over the decades. Definitely on my early-80’s dance mix tapes.

Side two begins with “Club Tropicana“, a tune with a slightly different vibe to it. It is if you‘re at carnival, sipping a rum and fruit concoction as you dance the night away. As the fourth single, it reached number 60 in Australia, number 25 in New Zealand, number 13 in Germany, number 10 in Norway, number 8 in the Netherlands, and number 4 in Ireland and the UK.

They slow things down with “Nothing Looks the Same In the Light”, a first glimpse at the type of ballads that George would come to perfect in the coming years.

That slow interlude is short though, as “Come On” brings the party back into boogie mode. It meshes very well with the other songs on the album as I am sure many DJ’s back in the day would do (creating a Wham! set).

The side and album then finishes off with “Young Guns (Go for It)”. This was the first single from the album, released in late 1982, and went to number 20 in Germany, number 10 in Norway, number 9 in the Netherlands, number 4 in Australia and New Zealand, number 3 in Ireland and the UK, and number 1 in Sweden. What I really enjoy about this song is the back-and-forth exchange between George and Andrew. The video capitalizes on that aspect of the song.

“Bad Boys”, “Wham! Rap” and “Young Guns” were all tunes I’d been hearing out in the bars and had seen the videos for a few times on MTV. They were infectious, and that lead me to seeking out the album on vinyl that summer. I played those tunes a lot over the coming years as I was off at college. They often would often be played at floor parties and dances, weaving into the soundtrack of carefree nights out unwinding after long days of academic endeavors.

To this day, the album brings back those fond memories. It has a permanent place in my play lists as some of the songs are my very favorites from that year. As they said, “enjoy what you do” - and I readily admit I do enjoy listening to Wham!
Posted by Martin Maenza at 5:23 AM

I really want this album on vinyl, I have Young Guns as 12" single and Bad Boys as 7" and I also know all of the words to Wham Rap as well as both of the songs mentioned above XD

Emily, thanks for the comments. I hope you are able to locate it soon for a good price.

Great review. I only owned this on a copied cassette tape many years ago. (It may still exist buried in a box somewhere...I will be doing some cleaning today so I might locate it)

I have Club Tropicana on my IPod. Great song.

Thanks, my friend. My vinyl copy is long gone. I picked up the CD from Amazon.com a couple years back for a good price.

WHAM! is one of my favorite 80s groups to play randomly on a jukebox when I got into a bar. the reactions that it gets from people are diverse, but no one ever really says that they hate them you know? I love it when a people's can come together with music. it makes me smile. great blog my friend.

Thanks, Rosemarie! Glad to be following your blog too - again, that common love of music.

Wham certainly left a mark on the 80's. "Make it Big" is classic, and "Music from the edge of Heaven" contained a few genius songs.

10DD, indeed they did. And I'll eventually talk about those two albums as well - count on it.