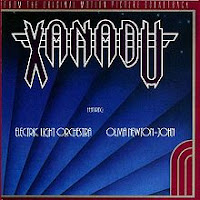 Welcome back to Soundtrack Sunday. This one goes out to one of my Twitter followers (a fellow lover of all 80's music) who shares my immense appreciation for this album.

On August 8th of 1980, Universal Pictures released a film starring Olivia Newton-John, Gene Kelly and Michael Beck. It is the story of Sonny Malone (Beck), a talented artist who was unsatisfied with his day job of painting larger versions of album covers and longs for something more. Into his life comes a mysterious girl named Kira (Newton-John) who turns out to no only be an artistic muse for him but also an actual muse (i.e. daughter of the Olympian god Zeus). Add to the mix former big-band leader Danny McGuire (Kelly) who is looking for one more big adventure and you get the $20 million dollar musical extravaganza Xanadu.

The soundtrack, however, was another matter entirely. Proceeding the film release by almost a month (it hit the US Billboard Album chart on July 12th of 1980) the album was certified double-platinum. It reached number 1 in Newton-John's native home of Australia, number 2 in the UK, and number 4 on the US Billboard Album chart (with thirty-six weeks on the charts). It also spawned six top 40 singles. Net result - music gold!

Side one focuses fully on songs by Olivia Newton-John. It begins with "Magic" which went all the way to number 1 on the US charts and stayed there for four weeks. In the film, it was used when Sonny finds Kira skating in the old abandoned building that would eventually become the dream night club. This is a pleasant pop song and a good bridge between songs from her previous album Totally Hot and her next one Physical.

Next up is "Suddenly", a duet with Cliff Richard, that made it to number 20. This song appears in the film when Sonny shows Kira the "magic" used in the music studios to inspire artists while recording. This is my favorite song from the album by far. I am a huge fan of duets, and this one is nearly perfect. The vocals of the two artists compliment each other perfectly. If I did karaoke, this would be a perfect song to perform with a female singer (of course, my wife would tell you I should never sing in public - I did karaoke once back in the 80's - not pretty). But in my mind, I would kill on this song.

The center piece is "Dancin'", a number that features the Tubes. The song is a fusion of two distinct musical styles - big band and new wave. Thanks for creative lyrics and rhythms, the two merge into a perfect past-meets-present performance. It is a fun song. In the film, it is used when Sonny and Danny are sharing their visions for their night club.

Next is the ballad "Suspended In Time", used in the film when Kira tries to explain her feelings for Sonny to her parents. The song harkens back to those that Newton-John was famous for in the 70's - it has that pop-country feel that made her famous.

The side ends with "Whenever You're Away From Me", a duet with Gene Kelly. In the film, it accompanies the dance between the two stars. This one too has that big band feel. That's one thing I love about this album - it brings together a number of musical styles in a single place and, for me, it makes them all work. Xanadu is very much a celebration of music.

Side two showcases the rock mastery of the Electric Light Orchestra. It begins with "I'm Alive" which reached number 16. In the film, it is the opening number with Kira and her sisters emerging from a wall painting complete with Technicolor auras. The song is classic ELO with its big orchestration, sweeping effects and amazing harmonies. It fits the scene perfectly.

"The Fall" appears in the film when Sonny is skating around Venice Beach, desperately looking for Kira who has vanished. I love the driving beat - it echoes Sonny's beating heart as he longs to be reunited with Kira once more. Again, vocals and music are perfect on this one. Does ELO ever make a bad song? Certainly none of those on this album.

"Don't Walk Away" was the one single that was not released in the US. It did however reach number 21 in the UK. In the film, it is represented by an animated sequence by Don Bluth studios where Sonny and Kira magically take on forms like fish and birds. The song ties for my second favorite on the album. It is one of those songs that would be perfect on a mix-tape after a break up, a final plea perhaps to that love to give the relationship one more try.

"All Over the World" reached number 13 on the US charts. In the film, it appears when Sonny and Kira take Danny out to get some "glitz", new clothes for the big club opening. The number features some incredible dancing and outrageous clothing styles. This ties with my second favorite. I just love how it explodes from the opening. I can't help bouncing my feet and singing along on this one. I was very pleased to hear this song brought back for a new generation recently as it was used over the closing credits of the film Paul (which I reviewed here on my blog last weekend).

The album ends with the title track "Xanadu", the joint collaboration between Newton-John and ELO. It reached number 8 on the US charts and number 1 in the UK. This is the final number in the film, a fitting marriage of all the music that has come before it.

There were three more songs in the film that were excluded from the soundtrack.

"You Made Me Love You" was first recorded in 1946 by Al Jolson. In the film, it is used in a flashback when Danny is remembering how he first met Kira during his big-band days (she was a muse to him as well). This was released as the B-side to "Suddenly".

"Drum Dreams" is a driving instrumental track by ELO. It was released on the B-side of both "I'm Alive" and "All Over the World". In the film, it is the first of the three numbers during the opening of the club Xanadu; it features a roller-skating crowd, aerial acrobats, jugglers and more. I finally got this in digital format after visiting my brother last month (where I burned a copy from an old 45 onto a CD). It is good to hear it again after a couple decades.

"Fool Country" by Newton-John was released as the B-side to "Magic". It is a number that Kira and her sisters perform together interspersed with "Xanadu". Musically, it fuses the two styles of Newton-John - her newer pop styling (in a new wave way) with her classic country roots (in a hoedown way). I love this song just because it is so unique. This was probably one of the first B-sides I played a ton of in my old 45 collection. A definite hidden gem.

I had the Xanadu album on vinyl (as well as a couple of the singles on 45, just to get the B-sides). I loved the film and very likely bought this record within days after seeing the film. I got the film DVD (the version that included the soundtrack as a second disk, just so I could have everything on CD - and eventually digitally on my iPod too). This is clearly one of my favorite albums from 1980 and one I enjoy revisiting time and time again.
Posted by Martin Maenza at 8:19 AM

Excellent review! I agree with you -- this soundtrack is easily one of my favorite albums from 1980, too.