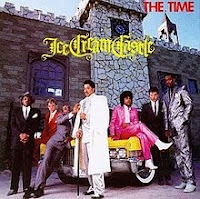 The cosmic influence of my iPod's shuffle must be trying to tell me something. The 1984 album Ice Cream Castle by the Time has come up now two weeks in a row while playing my 1980's playlist in shuffle-by-album mode. That's a rare occurance since almost a third (5176 tunes) of my total music library is in that decade playlist. I'm thinking "someone" is telling me I should blog about this one.


It was the summer between my Freshman and Sophomore years of college when this third album by the Minneapolis funk band was released. I was home on break, working in the freezers at the hometown ice cream plant to raise enough money to buy my first car. I remember buying this one on vinyl from Record Giant, the dedicated record store in the local plaza not far from my parents' house. The movie Purple Rain was a huge hit in theaters, and everything related to it was also doing very well - thanks to the extra push from MTV. The film features two songs that the Time performed in the film, two songs that probably come to mind by the general population whenever the band's name is brought up.

Like many of the earlier albums by the Time, Prince actually played most of the instruments for the record. He is credited to guitars, keyboards, base, drums and percussion. He also co-wrote a number of the songs. Morris Day is credited for lead vocals. Sharon Hughes provided additional vocals. Other instruments and backing vocals were done by Jesse Johnson, Mark Cardnas, Paul Peterson, Jerry Reed Hubbard, Jerome Benton, and Jellybean Johnson.

Let's break down the music. Like the previous two albums by the band, this record features six tracks total - three to each side.

Side one opens with the seven and a half minute "Ice Cream Castles", a song about an interracial relationship. This funky number features a solid drum line supported by rhythm guitar, with an organ solo thrown in near the end for good measure. It was the second single released for the album and not a bad track at all. It is certainly different sounding than the others.

"My Drawers" is next, a four minute jam as Morris Day asserts his claim to a particular woman. Again, not a bad track.

The side ends with "Chili Sauce", a nearly six minute conversation piece that features Morris trying to impress his date for the evening (Hughes). It is peppered with humor and focus on Morris' lothario swagger that he used in the film as well. While entertaining (Prince voices the waiter), it isn't a track I would seek out too often. I find it very much out of place with the rest of the record.

Side two kicks off with the five and half minute "Jungle Love", the first single from the album and their first to hit the top 20 on the US Billboard charts. This was one of my jams back in the day (and still today). The rhythm is so infectious! When it came on in the clubs or at dances, I just had to be out on the floor. This one was featured in Purple Rain with a lot of high energy which further helped to add to its popularity.

Next up is the seven and a half minute "If the Kid Can't Make You Come", the follow up to the plot line from "Chili Sauce" where Morris gets his date back to his place for a night of adult activities. Where Prince would take something like this and make it very seductive, Morris tends to come off as brazen and crude. In the end, it is hard to tell who has the upper hand - he or his date.

The album closes with the live recording of "The Bird", a nearly eight minute dance number and the final single from the album. This one barely cracked the top 40 on Billboard, but it out performed "Jungle Love" on the dance charts (reaching number 6 while the former single only hit number 9). Again, this was a number featured in the film with an incredible performance. And, it too, was one of my jams at the time (and even today).

For me, side two was the part of the album that got the most play on my turntable. I would tend to crank it for the first and third tracks, but drop the volume for the middle one (if having not lifted the needle up to skip over it). Having the long versions of "Jungle Love" and "the Bird" was the reason I plunked down for the album back in the day.

So, is the album worth it? For fans of the Time, most definitely. For devotees of all things Prince, absolutely (since his influence is strong on this one). For those who love 80's music, you're probably fine with snagging the two big hits from it and passing on the rest.

After three years together, the Time split up after touring with Prince (they opened on the "Purple Rain" tour, which I had the pleasure of getting to see in 1985 - awesome show!). Everyone went on to pursue individual projects. Morris did a couple solo albums as did Jesse Johnson. Jimmy Jam and Terry Lewis became successful songwriters and producers. Morris even did some additional acting. The Time would come back together in 1990 for their fourth album Pandemonium and appearances in Prince's Graffiti Bridge film. But that's at least two to four blog-reviews for another time.
Posted by Martin Maenza at 4:38 PM