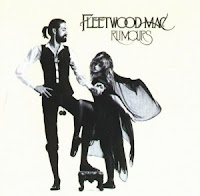 Welcome back to Seventies Saturday.

In 1977, Fleetwood Mac released their 11th studio album Rumours which became the highest selling album of the band's career. Rather ironic too since the relationships within the band were starting to break apart just as they hit the pinnacle of their success. I guess that makes for good song writing topics.

I heard this album a lot growing up. I was in 7th grade when it came out, and my brother had it on vinyl. I think everybody had it. Tracks from it were played heavily on the album oriented rock stations for many years after, and a number of songs crossed over to the top 40 charts as well.

I find the majority of the album very enjoyable - songs I'm very happy to listen to time and time again. They all take me right back to the 70's when I was riding my bike all over town, collecting Wacky Packages and first getting into collecting super-hero comic books. It reminds me of summer time too since that's when a number of the singles were dominating the pop charts.

Side one starts out with "Second Hand News" with its catchy chorus. Next up is "Dreams", the bands only single to hit number 1 on the US Billboard charts. I love the drums on this one - they give a feel of a thunder storm outside a rain soaked window. "Never Going Back Again" is next with its wonderful guitar accompanyment (very minstral like in tone). "Don't Stop" reached number 3 on the Billboard charts; it was also used by Bill Clinton in 1992 as a theme for his Presidential election campaign (don't hold that against the song though - it is classic rock number despite any political ties). "Go Your Own Way" was the first single from the album and it made it to number 10 on the US charts. The side then ends with "Songbird".

Side two begins with "the Chain" and the return of that minstral guitar sound. I love that it sounds like it is done and then comes back with another minute and a half of great guitaring. "You Make Loving Fun" was the final single from the album, and it too cracked the top 10 (getting up to number 9). I find this one soothing thanks to Christine McVie's vocals. The album then ends with "I Don't Want To Know", "Oh Daddy" and "Gold Dust Woman". These three are really lesser remembered tracks for me. The first side of the album was so solid that I hardly got around to listening to the back side that often. Still, all solid tunes.

I'd rank this one easily in my top 25 of albums from the 70's. It is certainly my favorite album by the band.
Posted by Martin Maenza at 8:07 PM

Greatest album of all time, period.