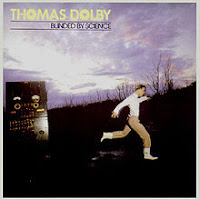 The January of 1982 EP release Blinded By Science was my first exposure to the musical master-works of British new wave/synthpop artist Thomas Dolby. It was during my Junior year of high school when I was listening to the local college radio station when I heard the songs on this disk. It didn't take long for me to seek out the vinyl at the local Record Giant.

The record charted at number 20 on the US Billboard Hot 200.


The EP is only five songs total, but each one is an extended version, giving the full disk a running time of just shy of a half-hour in length. That's pretty close to par of a full-album at the time and, if I recall correctly, it was a good bit cheaper (something like $5.99 for the EP versus $8.99 for a full album - no wonder I had so many EPs back in the day).

Side one began with the extended version of his big hit "She Blinded Me With Science". The single went to number 49 in the UK, number 7 in New Zealand, number 5 on the US Billboard Hot 100, and number 1 in Canada. I was a big fan of this song even before the advent of MTV (we didn't get the music video channel until the later part of '82 or early '83 where I lived); the video for this one is quite memorable and a hallmark of those early days the new visual medium. It helped propel the song into the top 10 on US Billboard charts in March of 1983. My buddy and I would often let loose a "SCIENCE!" for no reason after the song came out - just because it was a weird, geeky thing to do. Dolby did it so well in the song. The composition on this one is amazing, providing signature sounds that would resonate for years afterward in the collective consciousness of the masses.

The other track on the first side is the extended version of "One of Our Submarines", with its echo opening of the phrase "missing" - very cool to hear when listening with headphones. The song was originally written for the Thompson Twins whom Dolby worked with on their early albums. The song is a haunting ode to a crew whose sub goes missing during routine manouvers. The regular cut of this song first appeared on the B-side of the single release of "She Blinded Me With Science". The track went to number 17 on the US Mainstream Rock charts.

Side two kicks off with "Windpower", a powerful musical composition in its own right. This one charted at number 31 in the UK in 1982. All of Dolby's pieces on this album are varied and complex, making them a joy to listen to over and over again. And I certainly did that with this EP.

Next is the song "Airwaves" and lastly the extended version of "Flying North". This last track I haven't heard in a long time since I did not have a CD that included it (and my vinyl is long since gone). I need to seek out the mp3 of it for completeness.

All five of these songs were later put out on the second US release of Dolby's the Golden Age of Wireless album. The UK and the first US release only included three of the five, leaving out the big hit and its B-side.

This EP was my introduction to Dolby, and I loved what I heard. Since then, I've sought out other tracks by him to better appreciate his talents and contributions to the music of the 80's and beyond.
Posted by Martin Maenza at 5:25 AM