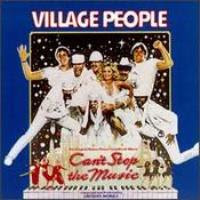 Welcome back to Soundtrack Sunday.

Poll one hundred people over the age of forty and ask them if they recall the 1980 movie Can't Stop the Music, which starred Steve Guttenberg, Valerie Perrine, Bruce Jenner, Paul Sand and the Village People. At least half will say they never heard of it, most others will say they heard of it and it stunk (it was the winner of the Worst Picture at the first annual Razzie awards) and maybe one or two people will say they like it. I'd fall into that last category.


The film was shot while disco was still popular and thus the music reflected that. However, by the time the film was released, disco was on the outs and thus the film suffered at the box office. Still, the soundtrack album did okay - reaching number 47 on the US Billboard Album charts (with a twelve week run), number 9 in the UK and number 1 in Australia. The movie is a pseudo-biography of the formation of the Village People, sort of. The music on the album reflected that with six songs from the band.

Side one begins with the title track which was part of the film's finale. As a single, "Can't Stop the Music" went to number 27 on the US Billboard Dance chart, number 19 in Austria, number 15 in Sweden, number 11 in the UK, number 2 in New Zealand, and number 1 in Australia. This song by the Village People is pure disco delight and celebrates the moving power of music.

David London was an alias used by Dennis Hardy "Fergie" Frederiksen when he worked with Casablanca Records in 1979. Prior to this, he had been a lead singer for the rock band Trillion. As the 80's progressed, he would go on to be a lead singer for Angel, LeRoux and Toto, as well as a backup singer for Survivor. The first of two tracks by him here is the sassy and slightly stalkerish "Samantha". It has a hard-rocking dance edge to it that really works for me.

The native-Philadelphia dance band the Ritchie Family are up next with the first of their two cuts on the album. "Give Me a Break", which hit number 80 on the US Billboard R&B chart, is brimming with female-empowerment backed by a funky guitar groove and pounding drum beat.

"Liberation" was on the B-side of the title track's single release.

"Magic Night" is rather light and fluffy in its carefree optimism.

Side two opens with London and "Sound of the City". It is a four and a half minute sweeping, grand ode to New York City and all that she has to offer. When the music builds and swells on this track, my own spirits rise as well. The number was used to open the film, and it inspired me further to someday see the Big Apple for myself (I would eventually do that a number of times six years later in the mid-80's). This song is a five-star rated track on my iPod as it never fails to perk up my mood within seconds of beginning.

The Village People promote diary delights with the fun and funky "Milkshake".

A re-recorded version "Y.M.C.A.", the band's big hit from their 1978 album Cruisin', is next. Ray Simpson who had replaced Victor Willis has the lead vocals.

"I Love You To Death" has a rough, more rocking edge to it - a teaser of the way the group's sound would evolve in the early 80's. David Hodo, the "construction worker", took the lead vocals on sexy and hard-hitting number.

The Ritchie Family returns to close things out with "Sophistication".

In the late 70's I was a big fan of disco music. I loved the beats and loved to dance, even if it was just in my bedroom or at the occasional Middle School dance. The Bee Gees, Donna Summer and the Village People were all represented in my vinyl album collection. When this movie came out on May 30th of 1980, I was compelled to see it. And, of course, I eventually purchased the soundtrack album on vinyl (and the DVD many decades later).
Posted by Martin Maenza at 9:50 AM

I must be the other guy who likes Can't Stop The Music although it's 95% because of the songs on the soundtrack. Puts it in a class with other movies from 1976-1980 in which the soundtracks are preferable to the movies themselves: Car Wash, The Fish That Saved Pittsburgh (soundtrack album is HARD to come by - I've only seen promo versions), Xanadu (I know you liked the movie much more than I did), Thank God It's Friday, FM, Foxes, Rock And Roll High School and Skatetown U.S.A.. On the other hand, the following movies from the same period are both fun to watch and have great soundtracks: The Warriors, Over The Edge, Saturday Night Fever, Grease, Urban Cowboy, The Blues Brothers, Little Darlings (only five tracks but all good), Bugsy Malone and Meatballs.