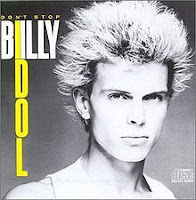 In 1981, Billy Idol left behind his position of lead singer for Generation X and struck out on his own solo career. Don't Stop was his first release, a four song-EP that helped put him firmly on the 80's music map. Idol even penned three of the four songs on this record.

"Mony Mony" is a cover of the 1968 hit by Tommy James and the Shondells. His version was a huge dance hit back in the day. Everyone got out on the floor, bouncing up and down, thrusting their fists into the air and chanting some rather interesting things in-between Billy's lyrics. It was always a highlight of the night. Brings back lots of great memories. The song had such staying power that a live version of the song hit number 1 on the Billboard charts in 1987, six years after the original release.

"Baby Talk" continues to show Idol's love of classic rock and roll. This song has the feel of a song from decades before, with the punk/new-wave attitude to give it an equally modern feel. A perfect balance.

"Untouchables" slows things down a hair, but still maintains that rocking edge. I find it to be a solid song.

"Dancing With Myself" surprisingly never charted, but it is probably one of the songs folks immediately think of when they think of Billy Idol. It has appeared in a number of movies over the years, and they even covered it on season 1 of Glee. Again, this is another dance favorite - having "dancing" right there in the title. It was first recorded by Generation X in 1980, and Billy released it again on his self-titled album in 1982.

If you're not familiar with Billy's catalog, this is a good place to start.
Posted by Martin Maenza at 6:55 PM