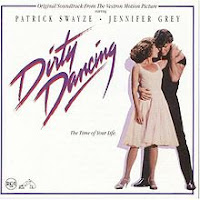 It was the fall of 1987 and I was having one of those "times of my life". It was my final quarter of my last year in college - four classes away from graduation and moving on from RIT, which had been my home for the last four years or so. I had a pretty reasonable schedule, classes from Monday through Thursday with a three day weekend to go out and cut loose dancing. I was also involved in a rather serious relationship at the time.

At the movies Dirty Dancing was the big blockbuster film, having made its debut in last August. It is the story of a teenager Francis "Baby" Houseman (Jennifer Grey) who was vacationing with her parents at a Catskills Mountain resort. There she meets and falls in love with a handsome dance instructor Johnny Castle (played by Patrick Swayze). I saw the film for the first time with my then-girlfriend, and I owned a copy of the soundtrack on cassette. I since own the CD and the DVD.

The music on the soundtrack is a mix between new tracks and songs from the early 1960's (given that the film was set in 1963). The album produced five top-10 hit singles, including one that reached all the way to number 1. Let's check it out.

Side one opens with the biggest hit - "(I've Had) the Time of My Life", a duet by Bill Medley and Jennifer Warnes. This song appears at the end of the film and is probably the signature song from the film - an instant karoake classic. This song ended up being a favorite of a lot of couples at the time, myself included; this was "our song" for my girl-friend and I that fall. A little known fact: the song was co-written by Franke Previte, better known as the lead singer of Franke and the Knockouts.

Next up is the 1963 classic "Be My Baby" by the Ronettes. It was written by Phil Spector, and sets the tone nicely for the time period of the film. It is also number 22 on Rolling Stone's Greatest 500 Songs of All-Time list.

Patrick Swayze then provides another hit from the album, "She's Like the Wind". He does a pretty good job delivering on this one. He is also the co-writer of the song, having written it three years earlier for another film (for which it was not used).

"Hungry Eyes" is next, another single, performed by Eric Carmen. This song was also written by Franke Previte. Then comes "Stay", the 1960 doo-wop hit by Maurice Williams and the Zodiacs. This one too is a signature classic from the film's time period.

The first side ends with "Yes", another hit single, from Merry Clayton. This one has the sound of early 80's songs by the Pointer Sisters or Patti LaBelle. I consider it one of those "lost hits" of the decade, one that I'd certainly throw on to an 80's dance mix-tape. It really gets you moving.

Side two opens with "You Don't Own Me" by the Blow Monkeys. It is a cover of the 1964 song by Leslie Gore; their take is one I like a lot though. This version is very cool, with a smoke-filled jazz club feel to it. The Blow Monkeys had a hit a year earlier with "Digging Your Scene".

Jumping back to 1962, we get "Hey! Baby" by Bruce Channel. Like "Stay", it makes me want to get up and dance, which is kind of the point of the film really. In that case, the song serves the film quite well.

Alfie Zappacosta provides "Overload" with its driving beat and rhythm. It has a little bit of a feel like Robert Palmer's "Addicted To Love", which is a good thing.

Next is the 1957 hits "Love Is Strange" by Mickey & Sylvia. The film has a great lip-sync to this song between Baby and Johnny. And, humorously, the comedy How I Met Your Mother paid homage to this in one episode where the character Barney Stintson (played by Neil Patrick Harris) references the song with his head super-imposed onto Swayze's body in a clip.

"Where Are You Tonight?" by Tom Johnston is the last original song on the album. Relegated the the back side near the end, I don't think it is as strong as the other original songs on the album. It does have a nice doo-wop feel to it at the start, making it a good fit with the older tracks on the album. The last song on side two is the 1956 classic "In the Still of the Night" by the Five Satins.

The first soundtrack album did so well, the studio rushed out a second More Dirty Dancing with other original songs and classic tracks from the film. Sadly, without the star-power of the first soundtrack's hits, it didn't do as well. I did have a copy of this one on cassette as well, just because I'm a completist. However, I didn't listen to it as much as I did the first.

The 80's was known for a lot of great movie soundtracks and Dirty Dancing was one of them. There is a good chance if you're into music from that decade either you or someone you know has this one (even if they aren't willing to admit it). Me, I'll gladly embrace it even if it comes with some cheesey-baggage with it. Hey, compared to some of the other soundtracks I've blogged about (or will in the future - trust me on this), this one is not nearly as cheesey.
Posted by Martin Maenza at 2:56 PM

Lightfallsup and I were watching this movie last weekend - in fact, we had a Swayze marathon. I had watched Too Wong Foo and then this. Then we watched Road House and Red Dawn. It was glorious.

I love Dirty Dancing, and I love the soundtrack. I have listened to Hungry Eyes and She's Like the Wind so very many times. In fact, I used to keep the movie itself on my ipod and listen to it like music when walking around. (did the same thing with Princess Bride)

Scott, very cool! It has been awhile since I pulled out the DVD. My wife and I enjoy "To Wong Foo..." - while it isn't as good as "the Adventures of Priscilla, Queen of the Desert", it is still pretty good.