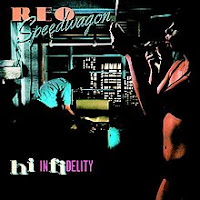 Hi Infidelity, released in November of 1980, was the ninth studio album by REO Speedwagon. The band was formed in the late 60's and had growing success in the 70's. But it was this album that represents the peak of their career, going nine-times platinum in sales in the US alone, five-times platinum in Canada, and even more so world-wide. It held the number 1 spot on the US Billboard Album chart for fifteen weeks, with a total chart run of one hundred and one weeks. It also went to number 34 in New Zealand, number 25 in Sweden, number 18 in Germany, number 17 in Norway, number 6 in the UK, and number 1 in Canada. Six singles were released from the album with four making it into Billboard's Top 40 and one achieving the number 1 spot.


Growing up, it wasn't too difficult for me to hear this album. My brother had it on vinyl (even though he focused a lot on classic rock acts like the Who and the Stones). The Top 40 stations were playing the single releases. The album rock stations were playing all of the cuts, even the deep ones. Girls loved this album, and even the heaviest of rock listeners would acknowledge it (if for no other reason than girls loved the album). You couldn't escape it if you wanted to - and why would you? The songs were very pleasant.

As I've noted before, a lot of times one side of an album will get more play than the other. I can say, for me, this was again true with this album. Side one tended to get the repeat listens on Hi Infidelity.

The album kicks off with "Don't Let Him Go", the third single from the album. It hit number 24 on the US Billboard Hot 100, number 11 on the US Billboard Mainstream Rock chart, and number 10 in Canada. I like the drum beats on this one; it gives it a solid foundation upon which the guitars and the vocals build upon.

"Keep On Loving You" is next. As the first single, it went to number 9 on the US Mainstream Rock chart, number 7 in the UK, number 2 in Canada, and number on the US Billboard Hot 100. It was also a go-to slow dance number. Rather ironic too since the guy is talking about how he'll remain loyal to his girl even though she's been with others. Go figure. Try to explain why "Stairway To Heaven" was a go-to slow dance number. We were just kind of crazy back then.

"Follow My Heart", the B-side to the first single, holds the center spot of side one. It has a great guitar-rhythm to it. This is one of those deep-tracks that album rock stations loved to play, especially when top 40 was playing the hits. It differentiated them. This is a solid tune.

"In Your Letter" has a throwback feel to classic 60's songs. It sounds like it could have been written for and performed by one of the classic girl groups. It adds a nice variety to the record. Released as the fourth single, it stuttered at number 36 in Canada, number 26 on the US Billboard Adult Contemporary chart, and number 20 on the US Billboard Hot 100.

"Take It On the Run" ends the side. As the second single, it hit number 19 in the UK, number 6 on the US Billboard Mainstream Rock chart, number 5 on the US Billboard Hot 100, and number 4 in Canada. This was one that everyone sang along too back in the day. Another top 20 single here.

Side two kicks off with the fifth single release "Tough Guys", which went to number 25 in the US Billboard Mainstream Rock chart. Everyone liked how it started out with that dialogue bit from the Little Rascals episodes. As kids we used to watch those all the time, so having it appear in front of a rock song was kind of a cool juxtaposition.

"Out of Season" was the last single from the album; it only hit number 59 on the US Billboard Mainstream Rock chart. It is a solid rocker that never really caught on as much.

"Shakin' It Loose", the B-side to the fourth single, has the middle spot on side two. It is pretty catchy and was nice to throw into a dance set, just because it wasn't as over-exposed as other tracks on the album.

"Someone Tonight", The B-side to the second single, is another strong rocker with a solid opening. It differs from the other songs because Bruce Hall sang the leads (as opposed to Kevin Cronin who sang most of the big hits). I think it makes this song stand out a bit, and perhaps lead it to be less played just because of that "infamiliarity".

"I Wish You Were There", the B-side to the third single, ends the side and album. It is more of a slower ballad. Again, a solid song but just not as popular.

All in all, this is an outstanding album. It fits nicely in that period that bridged the 70's and the 80's. It feels at home in the former decade but also has hints of what was to come in the later decade. For me, personally, it takes me right back to those early high school days - of school dances and hanging out with friends with the radio on in the background.
Posted by Martin Maenza at 5:21 AM

Great review. I just got an old vinyl copy of this album, and although I have not listened to it in its entirety yet, I do remember all of the hits. It is funny, way back when, I never got the true play on words of the album title as a kid. I thought it was simply a play on the old records that used to boast "high fidelity", referring to the sound quality. Now I get the other meaning.

And now that you bring it up and I look back at the songs (and their lyrics), a good number of the songs can relate to the "Infidelity" in the title. Thanks for bringing that to my attention. And thank you for following the blog too! I appreciate knowing that folks are reading.