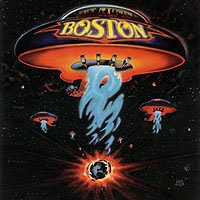 Welcome back for another edition of "Seventies Saturday".

The second best-selling debut album of all-time (to date) goes to the American rock band Boston for their self-titled 1976 record Boston. It has been certified as 17x platinum, it peaked at #3 on the Billboard 200 album charts, and it is one of the 1001 Albums You Must Hear Before You Die. Unless you've been living on a deserted island for the last 35 years, though, I am sure you've already heard it.


It was the summer after I completed 5th grade when this album came out, and my older brother who was in high school bought a copy from the local record store. The first time I heard it was most likely muffled through the wall that seperated our bedrooms. Since then, I've probably heard these songs dozens upon dozens of times over. All eight tracks are main staples of classic album rock radio. This is a true classic album in every sense of the word.

Let's look at the tracks:

Side one begins with "More Than A Feeling", the first single from the album. It peaked at number 5 on the US Billboard Hot 100 and was named the 39th best hard rock song of all time by VH-1. Ironically, the song only places at number 500 on Rolling Stone's 500 Greatest Rocks Songs of All-Time list (and the album doesn't even appear on the magazine's 500 Greatest Albums of All-Time, a slight to be sure). It was also a playable song in the first Guitar Hero video game. The guitar work on it is incredible.

Next up is "Peace of Mind", the third and final single from the album. It peaked at number 38 on the US Billboard Hot 100. Again, amazing guitar work on this one as well.

"Foreplay/Long Time" completes the first side. It was the second single from the album (reaching number 22 on the US Billboard Hot 100), and it combines the instrumental opening "Foreplay" (two and a half minutes long) with the main song "Long Time". Classic album rock stations always played these two together as one nearly eight minute unit. A perfect opportunity for the deejay to grab a quick smoke or bathroom break.

Side two kicks off with "Rock & Roll Band", an almost autobiographical track about a band paying its dues and making it big. The added touches of the screaming fans in the background works well here. Next up is "Smokin'", the b-side of the first single. I love the cascading guitars on the chorus of this one as well as the organ solo mid-way through.

"Hitch A Ride" holds the center spot. This one sort of takes the tempo down a little bit, a nice change of pace. It is very 70's in its sound.

"Something About You" follows. I have to admit it is probably my least favorite track of the eight (one has to be, right?) but it is still a decent tune.

The album ends with "Let Me Take You Home Tonight". The arrangement on this song, as with the others, is really interesting. That's something today's music seems to lack - a true sense of composition and harmony of the various elements.

This whole album is one can't go wrong with on a long car trip, when you're cruising down the highway with the windows down. You pop the album in, crank it up and sing along to your favorite songs. And whatever your problems or cares were, they simple fade away in the rearview mirror as you leave them behind.

The same effect could be achieved back in the day, before I could drive, by plugging in my headphones, turning off the lights and letting the music wash over me as I laid down on my bed. Problems just went away, cast out by the driving beat of these songs. Cheaper than any therapy could be.

That's what this album does to me. How about you?
Posted by Martin Maenza at 8:26 AM

I had a very similar "big brother" experience with this album. But as a grew up, I largely ignored it with the exception of hearing the songs on radio.

That all changed less than a month ago when I purchased a nice turntable and obtained a sudden incurable addiction to old vinyl records. I was told to get this Boston debut album, and I did. Old used scuffed cover but good condition record.

It is absolutely mind blowing how good this album sounds. Tom Scholz is a genius, and his talent really shows on this record.

Oh, cool! I'd love to have a turntable again. I miss all my old records. My brother kept most of the 45s but sold a good portion of my albums. Bummer but what can you do.

This debut is really amazing and Tom Scholz is a true talent indeed. This belongs in all collections in some form or another.