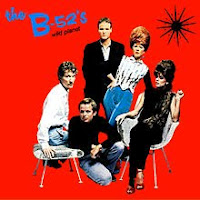 On August 27th of 1980, the B-52's were coming off a solid debut album. They kept the momentum going with their second album Wild Planet, which included their first use of electronic drum machines. It performed very well on both the US and UK charts, breaking into the top 20 on both. It spent twenty-seven weeks on the US Billboard Album chart, peaking at number 18.


Side one kicks off with "Party Out of Bounds" as the band comes to crash a bash, only to explain why the party has gone off the rails to begin with. Had they invited the band to begin with, I doubt it would have had a single dull moment. The music of the band was always a sure-fire hit in any early 80's parties.

Next up is "Dirty Back Road". The opening guitar sets the mood nicely, and the pace of the vocals add to the imagery as well as they together wind along for three and a half minutes. "Runnin' Around" harkens back to some of the tracks on their debut album, reminding the listener of what they had liked previously (that surf-punk guitar rhythm seen previously on "Rock Lobster"). I like the use of musical pauses on this one - it fits the lyrics and feel (the panic looking about, stopping, checking another way, running again). "Give Me Back My Man" features solo lead vocals by Cindy Wilson. Often when people think of the B-52's female sound, they tend to think of Kate Pierson. This song is a reminder of the many contributions Cindy provided to the band.

"Private Idaho" closes the side. It was one of the tracks released as a single from the album, however it did not chart very well (only reached number 74). Still, it was often played, especially on college radio stations. I like how all the elements work on this one - again the surf-punk guitars, Fred and Kate's vocals, etc. A classic tune to be sure.

Side two opens with "Devil In My Car". It attempts to change up the guitar work, making it sound a little different from the tracks so far. Unfortuntely, that's about the only impression it leaves on me. It is not one of my favorite tracks here or from the band in general. I cannot say the same about "Quiche Lorraine" though. Something about this little tune about a beloved poodle is so appealing. Maybe it is because it is so quirky - with the organ, Fred Schneider's narrative, the girls' calling refrain. It all just works for me and makes it a very memorable track.

I'm also very fond of "Strobe Light", an incredibly danceable track. In fact, its frantic pace is a good work out. Plus, how can you not smile at the line "let me kiss your pineapple!"? It is definitely one of my favorites from this album. The side and the album ends with "53 Miles West of Venus". It has a very spacey feel to it - with the guitars and drums (courtesy of Ricky Wilson and Keith Strickland), plus the out-of-this-world vocals from Kate and Cindy. I could see it being used over an establishing shot on a sci-fi film.

I was first exposed to this album from my older brother and the local college radio station I listened to while in high school. When I got my first CD player in 1990, this was one of the first albums I picked up (having not owned it before and finding it along with the B-52's debut album on CD for a really good price). I think over three decades, Wild Planet still holds up pretty well.
Posted by Martin Maenza at 7:32 AM

Nice breakdown of the album. While I am quite familiar with every single released by the B-52's, I have never explored one of their albums. They have always seemed to show a talent for catchy hooks and a party vibe.

The B-52's are great, this is an album which I really want. It was my mum who introduced me to them, but my dad who owned the CDs