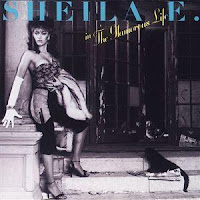 Sheila E. is the singer/drummer/percussionist daughter of percussionist Pete Escovedo. From her father, she developed strong roots in Latin and jazz. When she met Prince, who penned four of the six tracks on her debut, she added to the mix some funk and sex. The results are her amazing June of 1984 debut album The Glamorous Life.

Things kick off with "the Belle of St. Mark" which was the second single from the record. It went to number 68 on the US Billboard R&B chart, number 34 on the US Billboard Hot 100, number 18 in the UK, number 16 in Australia, number 15 in Ireland, number 8 in the Netherlands and number 5 in New Zealand. It is a five plus minute dance track with a catchy hook and refrain. It really gets the record off to a nice start.

Next up is "Shortberry Strawcake", a nearly five minute instrumental jam that showcases Sheila's percussion mastery. She co-penned this one with Jesse Johnson. In a lot of ways, this one reminds me of the things Prince would do a year or so later under the "Madhouse" group (jazzy instrumental pieces).

"Noon Rendezvous" ends the side. Between the beat of the music and Sheila's sultry vocals, you're almost hypnotized by the song. She co-wrote this one with Prince, and you can certainly pick out the elements he added to the mix.

Side two kicks the party up a notch with the upbeat "Oliver's House". If I had to pick a second favorite song from this album (and it is hard since I love all of the songs on this record), it would be this track. It has bouncy lyrics and amazing percussion by Sheila.

"Next Time Wipe the Lipstick Off Your Collar", perhaps one of the longer song titles you'll ever encounter, is an interesting ballad. In short, the woman outlines how the simple things are enough for their relationship - but he's got to stop fooling around with others (or at least hide the evidence).

Finally, the title track and Sheila's first big hit "the Glamorous Life". This is definitely my favorite tune from the record. As the first single, it went to number 7 on the US Billboard Hot 100 and number 9 on the Billboard R&B charts. It also hit number 1 on the US dance charts. This song was always a big club favorite. The floor was full before the opening sax part ended - everyone loved it! I love its message too "without love it ain't much".

I had this album on vinyl and no doubt played it at least a hundred times. I got it on CD a couple years ago. Clearly it is a favorite of mine. I like that the six songs offer a lot of variety in the thirty plus minutes total running time. I was even lucky enough to see many of them performed live when the Purple Rain tour rolled through Buffalo, NY, in December of that year.

If you're only familiar with the hit single and like that song, I encourage you to check out the rest of this album. I don't think you'll be disappointed.
Posted by Martin Maenza at 6:00 AM

I remember the Purple Rain tour well, and was at the Buffalo, NY stop. Next Time Wipe The Lipstick Off Your Collar was not the best song, but was definitely one of the best performances. I would love to find a video of that poor schmuck she had from the audience being held down while she essentially expressed what might happen to him if he ever DID do her wrong. I recall the muscle man dabbing the sweat from the guys forehead like it was yesterday!

Evan, I totally remember that bit with Sheila E. as soon as you brought it up. Man, how cool! I am sure they did that bit in every city, but you are right - that poor guy. The look on his face was priceless. Thanks for the reminder.