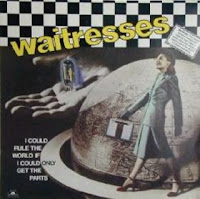 Hailing from Akron, OH, the Waitresses were a new wave band led by guitarist/songwriter Chris Butler with lead vocals by Patty Donahue. In 1982, they put out their first album (which I'll review at a future date) and followed it late in the year (November 8th) with the five-song EP I Could Rule the World If I Could Only Get the Parts.

I got the aforementioned EP (do you really want me typing the title again? We'll just call it "the EP" from here on out.) from my local record store when it hit. My main reason for doing so had a lot to do with a little show called Square Pegs (click here for my earlier blog post about the show) which debuted in the Fall of 1982.

Side one starts off with the now infamous "Christmas Wrapping". No doubt you've heard it around the holidays, as Patty laments how hard it has been all year to get together with that special guy. It is truly amazing that this song lives on every year. I know, for me, it isn't the holiday season until I've actually heard this one on the radio. It has become a true classic. It actually was first released by the band in 1981 and was released again on this EP.

"Bread and Butter" is the other track on this side. It features Mars Williams on saxophone, one of the signture sounds for the band. I also like how the back-up singers want to keep starting the chorus before the verse is over (a nice touch).

Side two begins with the theme song "Square Pegs". This was the only place to get this song, and my buddies and I were obcessed with this show at the beginning of our Senior year of high school (again, see the link above for all my thoughts on the show - no need to repeat it all here). We were always singing along to this one.

Next up is "The Smartest Person I Know" and then the EP ends with "I Could Rule the World If I Could Only Get the Parts" (probably the longest song title ever). Like all the songs by this band, the lyrics are smart, sassy and sarcastic at times. Patty delivered them with just the right amount of all three.

What I really liked about this EP and the Waitresses in general is that their sound had unique qualities to it. It didn't sound like everything that was playing on the radio at the time. It seemed fresh, exciting. Again, this came out just before we got MTV in our town so my only source of new sounds was the local college radio station. The Waitresses seemed like a sound of the future and I liked where things were heading. Sadly, the band would only last for one more full length album before splitting up in late 1984.

I gave up my vinyl copy of the album years ago. Luckily my brother kept and so I was able to complete my MP3 collection. Now I am able to relive the entire album again as I did so many times in my college days.
Posted by Martin Maenza at 7:02 PM

Email ThisBlogThis!Share to TwitterShare to FacebookShare to Pinterest
Labels: 80's, Billy Ficca, Chris Butler, Dan Klayman, I Could Rule the World If I Could Only Get the Parts, Mars Williams, music, Patty Donahue, the Waitresses, Tracy Wormworth