Willie Nelson with Waylon Jennings - Take It to the Limit 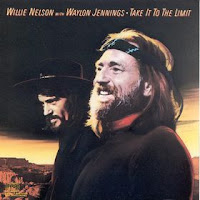 This month also marks the thirtieth anniversary of the release of Take It to the Limit, the third studio album that Willie Nelson and Waylon Jennings released together as a team. The record went to number 3 on the US Billboard Country chart and crossed over to number 60 on the US Billboard Hot 200.

The tracks break down with duets by the two men on the odd tracks, while the even ones are Nelson performing solo.


Side one begins with the duet on “No Love at All”, a tune that suggests that a little bit of love, good or bad, is better than none at all. I like the saxophone solo here by Jon Marett.

“Why Do I Have to Choose”, the first single from the album, went to number 3 on the US Billboard Hot 100 and number 1 on the Canadian Country charts. Nelson penned this track about having to make tough choices in a relationship and how he refuses to choose.

The tempo picks up a bit with the next track. “Why Baby Why” was first recorded by George Jones in 1955 and Charley Pride also had a hit with it in 1982. Nelson and Jennings do their version together here.

Jennings first recorded “We Had It All” on his 1973 album Honky Tonk Heroes. Nelson gives his own spin of this sorrowful tale of love lost here.

Side two opens with “Homeward Bound”, a Nelson’s cover of the 1965 Simon and Garfunkel classic from their album Parsley, Sage, Rosemary and Thyme. Here too, the cover is going up against an iconic version; while not bad, it hardly touches the original’s greatness. I do like the piano and guitar instrumental near the end though.

“Blackjack County Chains” is a picturesque story-song of a man on a prison chain-gang. I like the moody, skulking rhythm on this one.

“Till I Gain Control Again” was first recorded by Emmylou Harris in 1975 and Crystal Gayle released a version in 1982. Nelson’s take is done as a lovely piano ballad.

“Old Friends” is a 1982 country track penned by Roger Miller, on which he sang with Nelson. It celebrates those important, life-long acquaintances. Nelson and Jennings cover it here as a testimony to their own friendship.

The B-side to the first single, “Would You Lay with Me (In a Field of Stone)”, closes out the album. The song was the title track of Tanya Tucker’s 1973 album.

For me, Take It to the Limit is a bit of a mixed bag. Some of the better songs are the ones that are not as familiar to me, thus those covers are able to stand better on their own rather than in comparison to the originals.
Posted by Martin Maenza at 4:30 AM