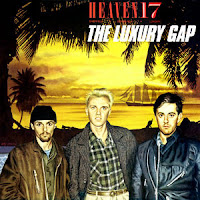 Today (April 8th) marks the thirtieth anniversary of the release of The Luxury Gap, the second studio album from UK synth pop group Heaven 17. This Platinum seller reached number 72 on the US Billboard Hot 200, number 20 in the Netherlands, number 18 in France, number 17 in Sweden, number 11 in New Zealand, number 7 in Germany and number 4 in the UK.


Since a few months prior the self-titled Heaven 17 compilation (click here for that review) had been released in the US, the US version of The Luxury Gap had a slightly different content and track order. For this review, I will be covering that vinyl release as it is the one I was most familiar with back in the 80’s.

Side one opens with “Crushed By the Wheels of Industry”; as the final single from the album, it went to number 17 in the UK and number 10 in Ireland. This very danceable track opens with an industrial, pile driving rhythm that sets the mood. Lyrically, it speaks to those who work toil in their field yet all choices and outcomes are controlled by those of higher power and authority. It calls for a liberation for the nation. One of my favorite parts is the piano part during the final minute or so because it dances in the background behind the beats.

Next is “We Live So Fast”. The percussion and the synths on this one set a very rapid pace; this one was definitely a workout on the dance floor. The lyrics are even more poignant in today's world than they were in the early 80's; life moves as such high speed today with instant access to information, etc.

“Let’s All Make a Bomb” first appeared on the band’s UK debut Penthouse and Pavement; the version here was a newly recorded one. This is one of the group's political songs, making a commentary on the growing business of weapons manufacturing of the early 80's. Of course, the band got their message across accompanied by moody, hypnotic dance rhythms.

The standout on “Key To the World”, for me, is the powerful horn sections during the opening and the chorus. They give this piece about living in the lap of luxury a large, extravagant scope. The whole song struts with a funky level of confidence and arrogance. The album's title comes from a line in one of the verses here.

Side two begins with “Temptation”. This single went to number 45 in Italy, number 25 in the Netherlands, number 15 in New Zealand, number 11 in Germany, number 3 in Ireland and number 2 in the UK. This one starts out slow and simple but quickly builds into a big, brash number with lots of soul and a hint of gospel testifying to boot. British singer Carol Kenyon's vocals soar over the guys on this number which was later used in the 1996 film Trainspotting.

As a single, “Come Live With Me” went to number 7 in Ireland and number 5 in the UK. The tempo slows slightly on this song about an older man dating a much younger woman (half his age). He is so smitten by her that he tries desperately to convince her to run away with him.

“Lady Ice and Mr. Hex” is a descriptive song about a unique couple instantly stuck with me; I once created a pair of super-villains for my Champions role-playing game world inspired by the names (she had ice powers; he affected probability and his opponent's luck). I like the piano and bass on this track as they add some jazzy touches to it.

“Song With No Name” also first appeared on Penthouse and Pavement. The darting, clipped vocals full of paranoia on the chorus of the song perfectly mirror the synth riffs. The whole piece has a dark and secretive aura to it.

“The Best Kept Secret” closes the album with a slower ballad that is beautiful in its restraint.

Having become an instant fan of Heaven 17 with their previous US release, I picked up a copy of The Luxury Gap on vinyl as soon as it hit my local record store in 1983. After that, I listened to it on vinyl or homemade cassette (for my car) countless times over the next decade and a half. I am amazed with how well I know each nuance and note as they have pretty much become ingrained in my consciousness. Of course, I have it now in digital format as one of those must-have-everywhere albums in my collection. It will remain a favorite of mine for decades to come I am sure.
Posted by Martin Maenza at 4:30 AM

Thanks for your track by track ananlysis and personal rememberances of one of my favorite records on your post today. I even went back and read your previous Heaven 17 posts - all good stuff. I'll give you one guess what I'll be listening to as I head out on my walk today.

Herc, thanks for your comments. They are always appreciated. Glad to find a fellow Heaven 17 fan.